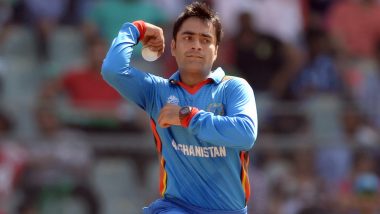 Afghanistan spinner Rashid Khan is shattered as his beloved mother Rashid Jana passed away after a prolonged illness. No sooner he shared a post about his mother, netizens started posted condolatory messages. A few days ago, Rashid had even asked the fans and his followers from all over the world to pray for his mother as he was unwell.  This also includes his Afghanistan teammate Hashmat Shahid who sent his prayers to him and his family. Earlier in the evening, a journalist from Afghanistan had posted about the death of his mother and now a while ago, Khan himself took to social media and confirmed the news. Rashid Khan to Continue Stay in Australia for BBL After Father's Demise.

The 21-year-old could not believe that his mother was no more. "You were my home my mother I had no home but you. I can’t believe you are no more with me you will be missed forever. Rest In Peace,” tweeted Rashid. Back in January 2019, Rashid Khan lost his father and without a few days itself, he was seen playing in the Big Bash Premier League for Adelaide Strikers.

I regret to say @rashidkhan_19 , #Afghanistan #cricket Star, mother passed away. Our hearts are saddened by your loss and our thoughts and prayers are with you, Rashid Jana. May Allah rest her soul in peace.

Rashid Jana, May Allah help you in this difficult time. @amirkhan6362

You were my home my mother I had no home but you . i can’t believe you are no more with me you will missed forever . Rest In Peace #MOTHER 😢😢

The demise of his mother comes in less than two years after Khan's father passed away. Back then the Sunrisers Hyderabad player was in Australia when he got the news of his father's demise and even took the field. The entire team of LatestLY sends thoughts and prayers to Rashid Khan's family in these difficult times.

(The above story first appeared on LatestLY on Jun 18, 2020 10:20 PM IST. For more news and updates on politics, world, sports, entertainment and lifestyle, log on to our website latestly.com).