SPL organisers were happy with Pujara’s participation as the Test cricketer will balance between his county cricket commitments in England and the T20 tournament. 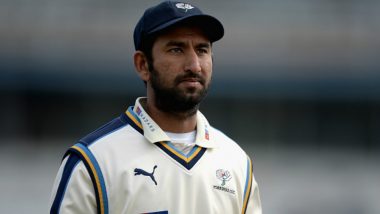 Indian’s Test specialist Cheteshwar Pujara will participate inaugural season of Saurashtra Premier League (SPL T20). Pujara will represent Zalawad Royals in the T20 league. The players draft was done on May 04. However, special draw was held for Pujara in presence of representatives of all the franchises. "Cheteshwar shall play Saurashtra Premier League T20 Tournament from Team Zalawad Royals," a statement from Saurashtra Cricket Association said. Cheteshwar Pujara Called 'Cheater' by Crowd, Refuses to Walk Despite Being Caught Behind Twice During Saurashtra vs Karnataka Ranji Trophy Semi-Final; Watch Video.

"As players drafting was done on May 4, SPL governing council decided to have drafting system in format of draw for Cheteshwar in presence of representatives of all teams, former BCCI secretary Niranjan Shah, SCA office bearers, SPL Governing Council, representatives of independent auditor and Cheteshwar himself," the release said. Cheteshwar Pujara Becomes First Batsman to Score a T20 Century for Saurashtra, Slams 100 off 61 Balls in Syed Mushtaq Ali Trophy 2019 (Watch Video Highlights).

A total of five teams will participate in the SPL T20 league. Out of the five teams, Kutch Warriors withdrew from draw process of Pujara as they had Jaydev Unadkat in their squad and wanted other teams to boost their squads.

It was Pujara, who was asked to pick a chit from the draw bowl having closed chits of four teams --- Gohilwad Gladiators, Sorath Lions, Halar Heroes and Zalawad Royals. Apparently, Pujara picked Zalawad Royals chit.

SPL organisers were happy with Pujara’s participation as the Test cricketer will balance between his county cricket commitments in England and the T20 tournament.

(The above story first appeared on LatestLY on May 09, 2019 03:37 PM IST. For more news and updates on politics, world, sports, entertainment and lifestyle, log on to our website latestly.com).