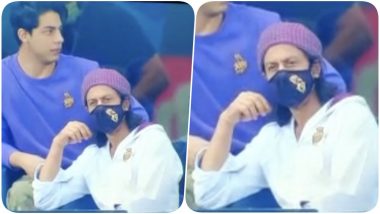 Shah Rukh Khan is at the Dubai International Stadium for watching the proceedings of the match between Kolkata Knight Riders and Rajasthan Royals. No sooner he was spotted in the stands, Rajasthan Royals pushed a tweet on social media and mentioned how delighted they were to see SRK with his son Aryan Khan enjoying the game. However, team Kolkata Knight Riders was having a difficult time out in the middle as they lost early wickets in the game. Sunil Narine, Andre Russell and Nitish Rana were the ones who crossed the 20-run mark. Captain Dinesh Karthik struggled with the bat as he got out one run. Rajasthan Royals Tease Kolkata Knight Riders After Sunil Narine's Dismissal During RR vs KKR, Dream11 IPL 2020 (Read Tweet).

Towards the end, it was Eoin Morgan who remained unbeaten and led the team to a respectable score of 174 runs. The team lost six wickets with Jaydev Unadkat, Ankit Rajpoot, Tom Curran and Rahul Tewatia getting one wicket each. Only England's Jofra Archer scalped a couple of wickets. Now, let's have a look at the picture below of SRK at the stadium.

Rajasthan Royals won the toss and elected to field first. As of now, Steve Smith and Jos Butler are the ones who started off the batting for the Royals.

(The above story first appeared on LatestLY on Sep 30, 2020 09:34 PM IST. For more news and updates on politics, world, sports, entertainment and lifestyle, log on to our website latestly.com).