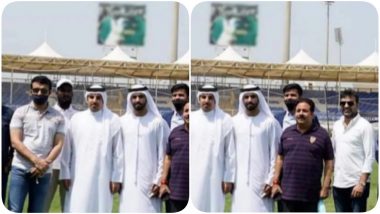 Sourav Ganguly is currently in UAE for checking out on the preparations of the IPL 2020. The BCCI President took to social media to share the images of his tour to the Sharjah Cricket Stadium. But here's something that was noticed by the eagle-eyed netizens. Ganguly had blurred the image of a Pakistani cricketer in the background which was a part of hoarding. Ganguly visited the stadium as part of his inspection, along with IPL chairman Brijesh Patel, former IPL chief Rajeev Shukla, and COO Hemang Amin, and officials from Emirates Cricket Board on Monday. Reportedly, the picture blurred by the BCCI chief comprised the names like former Pakistan great Javed Miandad, Rashid Latif, Misbah-ul-Haq, Azhar Mahmood, Danish Kaneria, etc. We still do not know the reason for blurring the snaps. IPL 2020 Schedule Time Table for PDF Download Online: Full Match Fixtures With Date, Timings in IST and Venue Details of Indian Premier League 13 in UAE.

The IPL 2020 is supposed to start from September 19, 2020, with the match between Chennai Super Kings and Mumbai Indians. Thus Ganguly made sure to travel in the stadium to make an inspection of the preparations for the IPL 2020. He shared the picture of the same on social media but blurred the images of the Pakistani cricketers in the background. Now, check out the picture shared by Ganguly.

Prior to this when many cricket associations including the Punjab Cricket Association and the Mumbai Cricket Association had removed the images of the Pakistani cricketers from their stadiums post the Pulwama attack, Ganguly had reportedly refused to do so. The BJP workers had even gone to the clubhouse of the Eden Gardens but yet the images of Imran Khan remained on the walls.

(The above story first appeared on LatestLY on Sep 17, 2020 12:00 AM IST. For more news and updates on politics, world, sports, entertainment and lifestyle, log on to our website latestly.com).