This Day That Year: Virat Kohli Makes His Test Debut Against West Indies in 2011 (Watch Video) 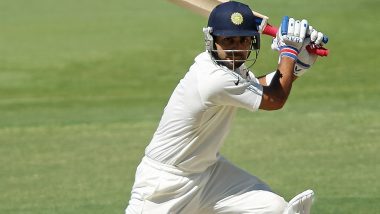 Just like other formats of the game, Indian skipper Virat Kohli boasts off a sensational record in Test cricket. However, the talismanic batsman’s illustrious journey in the longest format of the game went underway on exact this day (June 20) in 2011. Courtesy his brilliant performances in white-ball cricket, Kohli was drafted into the Test team during India’s 2011 Tour of West Indies. The right-handed batsman received his Test cap during the first Test of the series at the Sabina Park in Kingston. Virat Kohli Is Excellent in All Formats, No Need for Split Captaincy: Sanjay Manjrekar.

The Delhi-born cricketer wasn’t able to leave a major impact in the game as he registered the scores of 4 & 15. Pacer Fidel Edwards accounted for his wicket in both the innings. Nevertheless, MS Dhoni and Co won the game by 63 runs. However, Kohli struggled throughout the series as he could only score 76 runs in three Test matches. Owing to his poor show, he was dropped from the Test team during the England tour. Virat Kohli Wants to Win and Is Desperate for Victory, Says Former England Captain Nasser Hussain.

He, however, made a comeback in the 2011 home Test series against West Indies and scored twin fifties in his comeback Test at Mumbai. There was no looking back for Kohli after that as he played one magnificent knocks after another and gave nightmares to many prominent bowling line-ups.

So far, the star batsman has aggregated 7240 runs from 86 Test matches with the help of 27 centuries. Also, he is the only Indian batsman to have scored seven double centuries in Test matches.

Along with his batting prowess, Kohli has also proved his mettle in leadership. With 33 Test victories, Kohli is the most successful Indian captain in Test matches. Currently placed at number two in the Test batting rankings, the veteran batsman is expected to break and make many more records in the latter half of his career.

(The above story first appeared on LatestLY on Jun 20, 2020 12:31 PM IST. For more news and updates on politics, world, sports, entertainment and lifestyle, log on to our website latestly.com).