Virat Kohli Is Excellent in All Formats, No Need for Split Captaincy: Sanjay Manjrekar 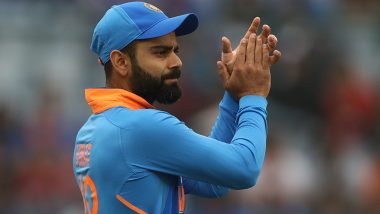 New Delhi, June 19: Former cricketer Sanjay Manjrekar feels there is no need for India to go for split captaincy in the near future due to the presence of current skipper Virat Kohli. Several top nations around the world have different captains in different formats but Team India are one of the few teams who have the same leader across formats. Australia have Tim Paine in Tests while Aaron Finch takes over the role in white-ball cricket. Similarly, Joe Root leads England in the longest and shortest formats, but hands over the armband to Eoin Morgan in ODIs.

Due to white-ball vice-captain Rohit Sharma's excellent captaincy track record in the T20 cricket, especially in the Indian Premier League, time and time again split captaincy debate open up in the India but according to Manjrekar, there is no need at all. "My theory on split captaincy is that you don't go looking for split captains," Manjrekar said during his show 'Ask Sanjay' on his YouTube channel.

"There might come a time in future when India will go for it but it is not something that you seek. If there is a situation when India have an excellent Test captain and Test player but not good enough to be in 50-over format or T20Is then maybe you have a different captain but India at the moment is quite blessed. "In the past as well when Dhoni was captaining in all formats because he was good in all formats."

(The above story first appeared on LatestLY on Jun 19, 2020 10:37 PM IST. For more news and updates on politics, world, sports, entertainment and lifestyle, log on to our website latestly.com).