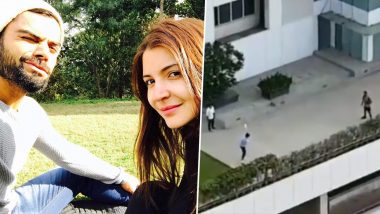 After almost two months without any cricketing activities, Virat Kohli, on Friday, put on his running shoes for a short outdoor session at his Mumbai residence. In a couple of videos on his Instagram page, Kohli could be seen running on a greenery space on the rooftop of the building he lives in. But running wasn’t the only thing Kohli did. He was also involved in a short knockdown session with wife Anushka Sharma and it looks like the Indian captain used the time to get the feeling of touching the ball to bat again by playing gully cricket. Kohli last played in the Test series in New Zealand before cricket and most other sporting events were suspended due to the coronavirus pandemic. Virat Kohli’s Running Video at His Residence Will Inspire You to Be Fit Amid COVID-19 Lockdown.

In a video shared by one of Kohli’s fan account, Kohli can be seen playing throwdowns with wife Anushka. Perhaps after his running session, Kohli was involved in a brief knockdown session. In the video, Kohli can be seen throwing few underarm deliveries to Anushka who bats first. Later, he asks Anushka to bowl some deliveries to him. The Indian skipper put on his gloves and started batting. Virat Kohli, Rohit Sharma Likely to Remain Stranded in Mumbai When Indian Cricket Team Resumes Training: BCCI Treasurer Arun Dhumal.

Surprisingly, the first delivery bowled by Anushka was a bouncer which was well defended by Kohli, She then followed it with a widish full delivery which was almost out of Kohli’s reach. But the 31-year-old somehow got to the ball and played it. From what it looked like, the Indian skipper many have got bored sitting without playing the game for the last two months and decided to get back to batting again.

Putting in the work is a way of life and not a requirement of profession. Choice is yours.

Meanwhile, Kohli and his limited-overs deputy Rohit Sharma could be left stranded in Mumbai as the BCCI plans for an isolation camp for the Indian team players said a top BCCI official. The Board of Control for Cricket in India (BCCI) is planning a self-isolation camp at the National Cricket Academy (NCA) in Bengaluru but the likes of Kohli and Rohit could be forced to remain inside their homes due to the situation in Maharashtra, which is worst covid-19 affected Indian state.

(The above story first appeared on LatestLY on May 16, 2020 10:52 AM IST. For more news and updates on politics, world, sports, entertainment and lifestyle, log on to our website latestly.com).