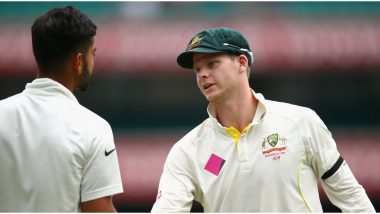 Brett Lee has picked Steve Smith as the better player between him and Virat Kohli. Both Kohli and Smith, two modern-day greats, have been subjects of constant comparison due to their run-scoring exploits across cricket formats. And while some have sided with Smith, most others have gone with Kohli as the best batsman across all formats. Lee picked Smith ahead of Kohli due to what the Australian has had to experience and overcome in his cricket career. The former Aussie quick also added that Smith, who currently holds the World No 1 Test batting ranking, can be as good as the iconic Don Bradman was. Mitchell Starc Eager to Play ‘Pink-Ball Test Against India’, Says, Will Be Great for Making Cricket Proper Contest.

"Look, it is so hard to pick because there are a lot of qualities in both that I enjoy. I try and look at from the bowling point of view, are there any flaws that I would try and exploit and there are very little. They are two different players,” Lee said during an Instagram live session with former Zimbabwe pacer Pommie Mbangwa. The speedster then went on to talk about Kohli and described him as not only the fittest cricketer but also a great leader. Pat Cummins Fires Warning to Virat Kohli-led Team India Ahead of India vs Australia 2020, Says ‘We’ll Be Ready for Them This Time’.

“You think about Kohli, technically sound, hits through the V. He used to knick off number of years ago, but tightened that up and doesn't knick off as much now and is a lot more disciplined. Super-fit, a great leader of his side. Kohli is definitely right up there," said Lee, who is the second-fastest Australian to complete 100 ODI wickets.

Smith, on the other, has been through a lot in the last 12 months, said Lee. Smith was stripped of the Australian captaincy and also banned from all forms of cricket for his role in masterminding the ball-tampering scandal in Cape Town 2018. But the Australian bounced back from the ban with a terrify Ashes where he hit three successive centuries and helped retain the Ashes.

"Steve Smith has been through a lot in the last couple of years that rise back to stardom with the way he has played over the last 12 months. He is a different batsman as well, very flamboyant, he is so fidgety, 'just relax that's what you think to him' but that's what makes him the player he is," Lee told Mbangwa. "At the moment, I would go with Steven Smith because of what he has actually been through. You ask me this tomorrow and I might go Kohli. They are so hard to split mate, like splitting hairs and they are two great players.

"He (Smith) could have been as good as (Don) Bradman and still maybe that. He's had some time out of the game but he was talked about him doing as well as Bradman in terms of his numbers," added the ex-Australian pacer.

(The above story first appeared on LatestLY on May 26, 2020 03:09 PM IST. For more news and updates on politics, world, sports, entertainment and lifestyle, log on to our website latestly.com).