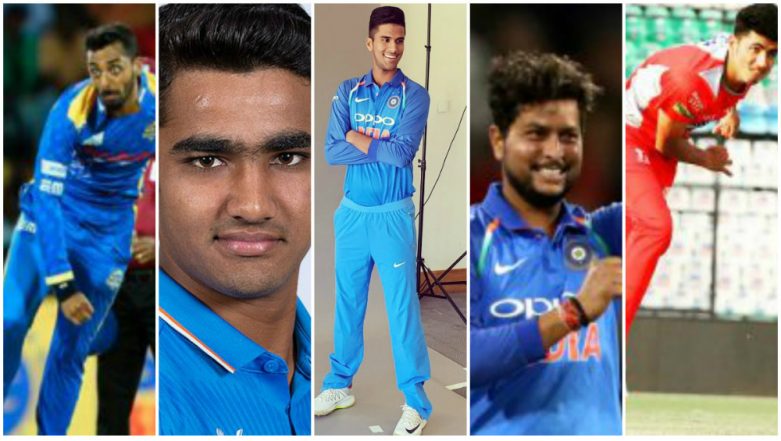 New Delhi, March 18: The Indian Premier League (IPL) has been the perfect platform for youngsters to showcase their skills and impress the global audience. In the last 11 years, the IPL has seen some quality players make a mark.

With less than a week left for this year's league to start, it will once again be interesting to see which players rise to the challenge against the best in the business. Vivo IPL 2019: Royal Challengers Bangalore Promises to Go Green on Global Recycling Day.

IANS takes a look at five mystery spinners who are expected to make a mark this season:

All eyes will be on this mystery spinner as Kings XI Punjab bagged him in the auction in Jaipur for a whopping Rs 8.4 crore - 42 times his base price of Rs 20 lakh.

Playing for Tamil Nadu, Varun bagged 22 wickets in the Vijay Hazare Trophy. He has six variations in his kitty: off-break, leg-break, flipper, top-spinner, carrom ball and the googly.

The 27-year-old shot into limelight in the Tamil Nadu Premier League (TNPL) 2018, scalping nine wickets from 10 matches, with a decent economy rate of 4.7. Looking at his record, Varun is expected to give batsmen a difficult time.

Apart from Varun, KXIP have another mystery spinner in Mujeeb ur Rahman. The Afghan spinner had a dream debut season in IPL 2018, bagging 14 wickets in the 11 matches he played. The right arm off-break bowler bowled with an average of 20.64 and an economy rate of just under seven.

Rahman also bowls some unbelievable googlies and under the guidance of his skipper Ravichandran Ashwin, who is an experienced off-spinner himself, the Afghan bowler is expected to only get better with every outing.

He has been a part of Kolkata Knight Riders (KKR) and the national team for a while, but reading Kuldeep Yadav is a difficult task even now.

The chinaman bowler, retained by the Knights, was one of their best bowlers, picking 18 wickets from 16 games. But the management would want Kuldeep to keep things a little tighter as he was slightly expensive with an economy of 8.14.

KKR skipper Dinesh Karthik will certainly expect the 24-year-old to replicate his show in this edition of the IPL, and alongwith Sunil Narine, Kuldeep is expected to forge a deadly combination.

At 19, Sundar is presumed to be one of India's next generation players. He had a good start to the league in 2017 and had scalped 8 wickets from 11 games, with a decent economy of 6.16.

The Tamil Nadu boy however, faltered in the second season as he managed just four wickets from seven games in 2018 with a poor economy. Sundar will look to leave it behind and start afresh in this year's league.

RCB have shown faith in the youngster and picked him for Rs 3.20 crore in the auctions, and Sundar will surely look to perform to the expectations of the franchise.

Another name to watch out for will be Rajasthan Royals' Mahipal Lomror.  Little known in the cricketing world before now, Lomror gained recognition based on his performances in India's Under-19 campaign during the World Cup in 2016. In the six games, Lomror scalped seven wickets with an impressive economy of 3.74.

The 19-year-old didn't get much chance to showcase his talent in IPL after featuring in just two games for the Royals last year.

However, given his record, Lomror will definitely be a spinner to watch out for. With the players having little knowledge about Lomror, the young spinner can certainly use the surprise element to his advantage.

(This opinion piece is authored by Kaushik Kumar of IANS. The views belong to the author. LatestLY does not take any ownership for the same)