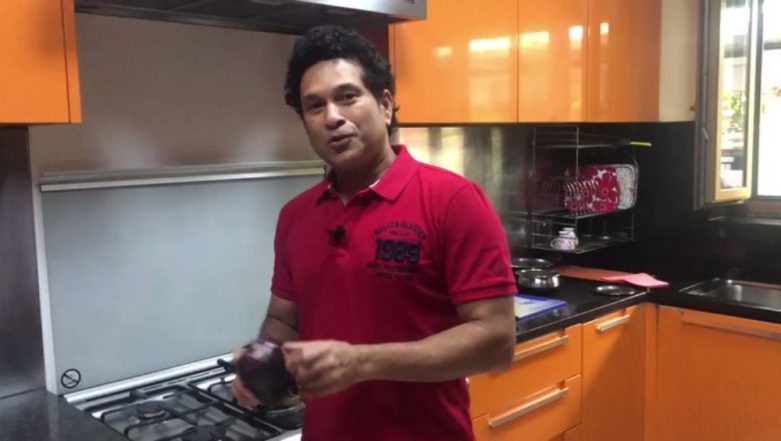 On International Women's Day, former Indian cricketer Sachin Tendulkar did something special for the important women in his life. The batting legend decided to cook baingan bharta or baingan ka bharta (a dish made from eggplant) on women’s day for his mother and wife Anjali.

Tendulkar took to Twitter and shared the video. In the video, Tendulkar can be seen cooking the special dish alone with no help from ladies in the house! “This #WomensDay, let's do something special for the important women in our lives. Join me and share your own sweet gestures of love using#SeeHerSmile Happy Women's Day!” Tendulkar wrote along with the video. Sachin Tendulkar Enjoys 'Tandoor Cooked Kebabs' at This Iconic Restaurant, Check Picture!.

“Today, I am going to make baingan bharta, especially for my mother. Of course, Anjali is there, Sara is not with us right now. She is travelling somewhere. So this one is for my mother and Anjali,” Tendulkar said.

“Let’s hope I get it right,” says the former cricketer while getting ready to prepare the dish. Women’s Day 2019: Do We Really Need a Day for Women? (OPINION).

Here's how Tendulkar prepared the dish

This #WomensDay, let's do something special for the important women in our lives. Join me and share your own sweet gestures of love using#SeeHerSmile

After preparing the dish, Tendulkar revealed that his mother used to cook baingan bharta when he was a kid. "So this bharta of course as I mentioned is for my mother, Anjali, and Sara. I want my mother to taste this first because she spent hours and hours cooking this for me when I was a kid,” Tendulkar said.

The 45-year-old then lets his mother taste it. "I made baingan bharta, see if you like it. Tell me if tastes like how you make it. Is it spicy?" Tendulkar asked his mother in Marathi.

Luckily, Tendulkar’s mother liked the taste of baingan ka bharta and complimented her son. Tendulkar then ends the video by saying, “that’s how mothers are. Even if you fail in any attempt, they never tell you.”