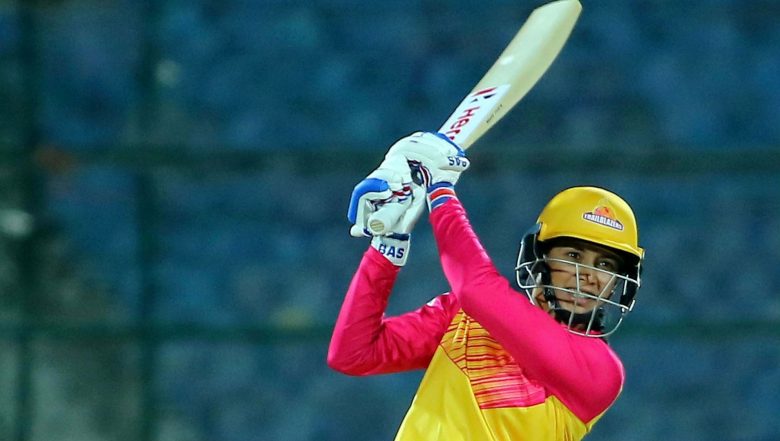 New Delhi, May 8: Smriti Mandhana, vice-captain of the Indian womens cricket team, feels that women in cricket have recently garnered the right kind of attention. Leading Trailblazers, one of the three teams in the Womens T20 League, the 22-year-old ace batswoman asserts that the only thing that defines her on the field is her performance and not her gender. For Mandhana, who is now one of the leading faces of women's cricket in India, labels are a thing of the past. Ahead of 1st Women’s T20 Challenge Match 2019: Velocity Team Skipper Mithali Raj Says, Women’s T20 Tournament Is a Good Opportunity For Youngsters.

"I no longer see myself as a woman cricketer but simply as a cricketer. Why should there be labels when none are required," Mandhana, who was just nine when she was first picked in Maharashtra's Under-15 state side, told IANS over email. Her secret, she said, is rising above the gender-based social conditioning and pursuing her dreams without compromises.

"It can get taxing when you don't have to simply perform but also constantly justify your place in the game just because of your gender. It would get frustrating when my male counterparts were questioned about their game or performance whereas I was fielding questions on gender stereotypes and my ability to stay committed to the game on account of my gender," Mandhana revealed.

She is unarguably India's best opener and was the highest run-getter in ODI cricket in 2018 with 669 runs in 12 games. The sterling performance won her the honour of ‘Best Women's International Cricketer' from BCCI in June 2018.

Her foray into cricket, a game followed like a religion in India, began when she was just six years old. Her father would take her brother to train, and a young Mandhana would just accompany them. Crediting her success to her family, Mandhana recalled the early steps of her now-inspiring career.

"I used to wake up at 5 a.m. in the morning, wait for my brother's cricket coaching practices to finish just so I could play the 10-15 balls pitched to me at the end.

"That used to be the highlight of my day and as soon as I would finish my 15 balls, I would start thinking about how I had to better myself for the next day's 15 balls," explained Mandhana, now a household name, along with Mithali Raj and Harmanpreet Kaur.

"It is an honour for me to be able to represent my country on an international platform. Apart from that, the adrenaline is so high when we are on the ground. It also helps that usually, everyone who is a part of the team is away from home, so we become each other's emotional crutches when needed," she said citing her teammates as one of the biggest sources of inspiration.

Sharing her personal fitness routine, Mandhana said protein shakes, eggs and soybean make easy way into her meals, since she doesn't eat meat. "Before the match, we follow an easy gym session to stay fit and alert, but during the off-season, we train really hard."

In a candid reply, she also shared how she manages to get breaks from her strict routine: "Daily runs and long baths." To that end, Mandhana will soon be seen in a television advertisement of ITC Vivel, where she will be seen after a day of batting, fielding, and training.