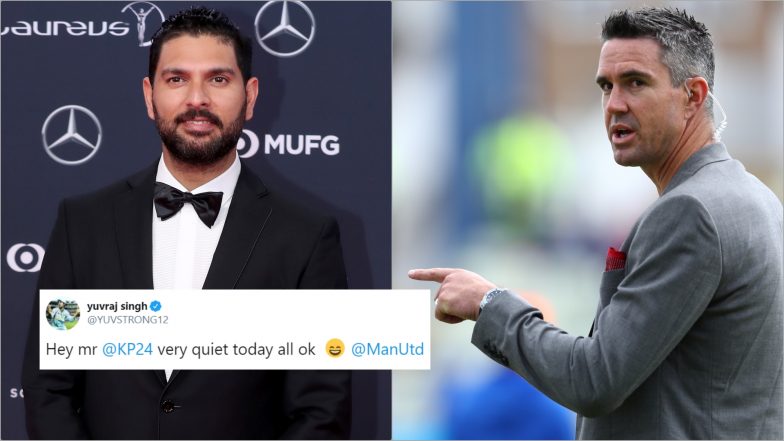 Manchester United produced one of their most scintillating display in recent times as they blanked Chelsea 4-0 at Old Trafford yesterday. Goals from Marcus Rashford, Anthony Martial and debutant Daniel James secured a massive opening day win for Ole Gunnar Solskjaer’s side. The win naturally left the Manchester United supporters jubilant while a pall of gloom descended over the Blue’s supporters. Ace cricketer Yuvraj Singh who is an ardent Red Devils supporter, took to twitter to pull his best friend Kevin Pietersen’s leg, who incidentally is a Chelsea fan. The duo often engage in light-hearted banter on social media, and this was another addition to the collection. Premier League: Marcus Rashford Nets a Brace As Manchester United Thrash Chelsea 4–0 in Opening Game at Old Trafford.

Yuvraj Singh tagged Kevin Pietersen and asked why the former England skipper was quiet referring to Manchester United’s win by tagging them too. The tweet since then has got a lot of response on twitter with fans gushing over Yuvraj’s tongue in cheek humour.

Earlier in the year, Kevin Pietersen blasted Twitter as it showed Manchester United would win the Champions League and the English Premier League (EPL) while they were struggling for form. He also commented on United’s status as a side trailing Manchester City in the battle of supremacy in its own city. This prompted Yuvraj Singh to come in defence of his beloved cub suggesting United have been the best side in England purely on the basis of titles won.

Yuvraj Singh is currently in Canada playing in the Global T20 league, but it seems he does not miss keeping a tab on Manchester United. The English side next face Wolves on the 19th of January and the Red Devils’ fans including the former Indian batsman will hope they continue with the form they showed on the weekend. As for Frank Lampard and his Chelsea team, Liverpool test awaits them in the UEFA Super Cup on Wednesday in Istanbul.