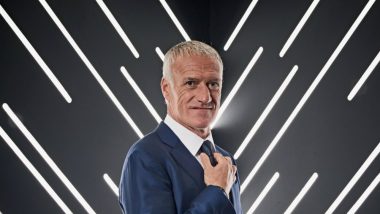 London, September 25: Didier Deschamps, who led France to World Cup glory in Russia, was honoured with the prize for best men's coach of the year at The Best FIFA Football Awards 2018 gala here.

Deschamps was the heavy favourite to take the honour after the World Cup triumph, which made him only the third person ever to hoist the trophy as both a player and a coach, joining Brazil's Mario Lobo Zagallo and Franz Beckenbauer of Germany.  FIFA World Team of the Year 2018: Cristiano Ronaldo, Luka Modric, Kylian Mbappe Among Others in the Star Studded Team (See Pics).

The prize for best women's coach went to Reynald Pedros, another former France international, who directed Lyon to the French domestic championship and the Women's Champions League crown in his inaugural season with the club.

(The above story first appeared on LatestLY on Sep 25, 2018 04:45 PM IST. For more news and updates on politics, world, sports, entertainment and lifestyle, log on to our website latestly.com).