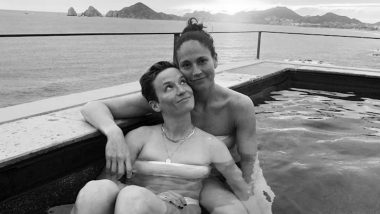 It’s party time for American footballer Megan Rapinoe and Sue Bird’s family as the two stars have gotten engaged. Yes! You read it right. Megan Rapinoe has gotten engaged to the WNBA legend Sue Bird after four years of dating. The WNBA legend has shared the snap of the picture of the ‘yes’ moment on her social media account. The two are often labelled as couple goals by the fans. Needless to say that the two have taken their relationship one step ahead. Rapinoe popped in a question in a pool-side setup. No sooner Bird shared the snap congratulatory messages started pouring in for the couple. Check out Interesting Facts About the Two-Time World Cup Winning US Footballer.

If the two happen to walk down the aisle, they will join the likes of  G-Eazy, singer Brandi Carlile, soccer star Lori Lindsey and Kamala Harris' niece Meena Harris, as well as basketball players Candace Parker, Andre Drummond and Kevin Love. All these imminent names from the sporting fraternity are known for same-sex marriage. Now, let's have a look at the moment shared by Sue Bird.

The two have won many accolades in their sporting career and are often labelled as the power couple. After the American footballer won the FIFA World Cup last year, Bird spoke elaborately abut her girlfriend and said, "I was happy. I was crazy. I was PROUD. I was pretending to know about soccer. I was a little overwhelmed. I was pretty damn American. And I was in love with Megan Rapinoe." Talking about the engagement, we wish them a happy life ahead.

(The above story first appeared on LatestLY on Oct 31, 2020 12:10 PM IST. For more news and updates on politics, world, sports, entertainment and lifestyle, log on to our website latestly.com).