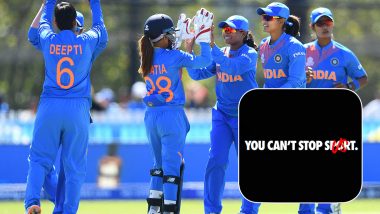 Nike are always known for their powerful campaigns and their latest ‘You Can’t Stop Us’ project spreads the message of unity and encourages everyone to come together as one for a change. The advert features a collective of everyday and elite athletes including the likes of LeBron James, Megan Rapinoe, Kylian Mbappe, Naomi Osaka, Cristiano Ronaldo and the Indian national women’s cricket team. Sunil Gavaskar Praises Indian Women’s Cricket Team, Says ‘They Won Countless Hearts and Should Be Proud of Their T20 World Cup 2020 Show’.

Narrated by US national women’s football team star and the 2019 women’s Ballon d’Or winner Megan Rapinoe, the short clip celebrates sport as a source of inspiration. The commercial is shot using a special spilt screen detailing 36 pairings of athletes while relating one sport to another. The video montage also shows the similarities shared by several athletes around the world in their respective sports. Indian Women's Cricket Team Pulls Out of Proposed England Tour Due to COVID-19 Pandemic.

Nothing can stop what we can do together. You can’t stop sport. Because #YouCantStopUs.

The advert also focuses on race, equality and even touches the Black Lives Matter Movement. ‘Players may be back on the pitch, but we are not going back to an old normal. We need to continue to reimagine this world and make it better’ says Rapinoe, reminding everyone that a change can be made in the world through sports.

The US football icon was also the first athlete outside the NFL (National Football League) to take a knee during the American National Anthem. ‘We have all these people in the streets, using their voices, and those voices are being heard. I ask people to be energized by this moment and not let up. I believe it’s everybody’s responsibility to advocate for change.’ Rapinoe continued.

(The above story first appeared on LatestLY on Jul 31, 2020 12:07 PM IST. For more news and updates on politics, world, sports, entertainment and lifestyle, log on to our website latestly.com).