Megan Rapinoe Birthday Special: A Role Model, Both on and off the Field 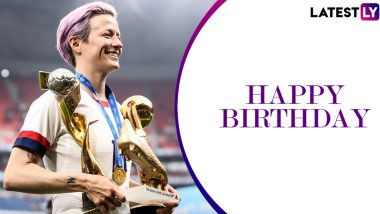 Megan Rapinoe guided the United States women's national soccer team to victory in the 2019 FIFA Women's World Cup. Under Megan, US won the final against the Netherlands. The US captain had a terrific run in the tournament and ended up as a winner of both the Golden Boot and the Golden Ball. Megan was born on July 05, 1985, in Redding, California. The footballer throughout her career has emerged as a role model for many. And not just because of her on-field skills, but due to her philanthropic efforts as well. She is a perfect role model in contemporary times when many celebrities don't speak up against social issues. Megan is known to speak her heart out, and she has done that on various issues. Megan Rapinoe, US Captain at FIFA Women's World Cup 2019, Emerges as a Star: 5 Times the Footballer Proved to Be Maverick.

Megan stood up in solidarity with former NFL (National Football League) quarterback Colin Kaepernick by kneeling during the National Anthem and thus became one of the first white athletes to protest against police brutality and racial inequality.

Megan has raised her voice against gender inequality as well. The 35-year-old has even publicly criticised FIFA for failing to bridge the gap between the prize money for the Men's and the Women's World Cups. She makes it a point to speak up whenever she feels FIFA has failed to do much for the women's game.

The footballer is involved in philanthropy as well and has donated to the Gay, Lesbian & Straight Education Network (GLSEN). She has made donations to the United States Olympic and Paralympic Committee. Megan has been associated with campaigns like Athlete Ally, and Juan Mata's "Common Goal".

Megan has even openly criticised US President Donald Trump. She even turned down the invitation to White House after the World Cup win. And proved, she stands by her words. Megan is in the twilight of her career, but she continues to be a role model this world needs more and more. Happy birthday Megan!

(The above story first appeared on LatestLY on Jul 05, 2020 10:00 AM IST. For more news and updates on politics, world, sports, entertainment and lifestyle, log on to our website latestly.com).