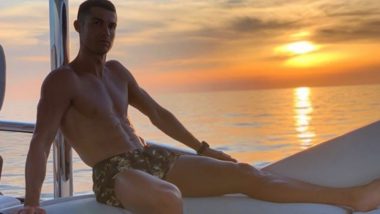 Cristiano Ronaldo is letting his hair down after quite a gruelling season in the Champions League 2019-20. He recently posted a snap where the Juventus star was seen flaunting his abs. Ronaldo shared the picture of the same on social media but had put up quite a cryptic caption which kept the fans wonder about his next move. In the snap we see the former Real Madrid striker flaunting his abs by the sea and enjoying the sunset. The cryptic caption left the netizens wondering. Recently he was linked to Barcelona as a large section of media had reported that the Italian giants had offered him to Barcelona and if everything went well, he could be seen rubbing shoulders with Lionel Messi. Cristiano Ronaldo to Barcelona Transfer News Latest Update: Juventus Star’s Camp Reacts to Reports of Possible Move to Join Lionel Messi.

The Portugal star has had quite a difficult time in Juventus. The team might have won the Serie A 2019-20 title, but they were knocked out of the round of 16 from the Champions League 2019-20 as they played against Lyon. Juventus lost on away goals despite the fact that the five-time Ballon d’Or winner. Ever since there have been rumours of CR7 moving on to some other club. Check out the snap shared by CR7 on social media.

There are only two options: the view or ME. I let you choose your favorite one?! 🤔😅

Ronaldo has been linked with PSG, Manchester United and a few other clubs for a few days now. It would be interesting to see if CR7 sticks to his current club or makes another stunning move.

(The above story first appeared on LatestLY on Aug 14, 2020 08:20 PM IST. For more news and updates on politics, world, sports, entertainment and lifestyle, log on to our website latestly.com).