Cristiano Ronaldo's camp have reacted to rumours linking him to Barcelona where he is reportedly set to join Lionel Messi. Spanish football expert Guillem Balague had claimed that Juventus had the Portuguese star to Barcelona and other clubs as they look to reduce their high wage bill. Ronaldo's close circle have now responded to those claims. 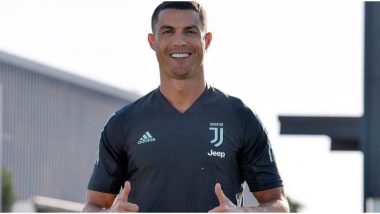 Cristiano Ronaldo’s camp have responded to transfer rumours linking him to Barcelona. The Portuguese superstar is reportedly looking to leave Juventus after just two seasons in Italy and has been linked with several clubs, including Barcelona and Paris Saint-Germain, in the past few days. He is upset after Juventus’ elimination from the Champions League and wants to leave the club. Juventud also reportedly wants to sell the five-time Ballon d’Or winner to reduce their wage bill and have offered the forward to several clubs. Cristiano Ronaldo Transfer Latest News: From Barcelona to Manchester United, List of Clubs Portuguese Star Has Been Linked to Since Juventus’ UCL Elimination.

Ronaldo joined Juventus from Real Madrid for a club-record transfer fee of 100 million USD in 2018 and has lifted successive Serie A titles with the Turin-based club. But their lack of competitiveness in the Champions League has left Ronaldo worried. In his two seasons in Italy, Ronaldo and Juventus have been knocked out of the quarter-final and round of 16 stages from Europe. Champions League failure has seen Ronaldo been linked to other clubs, which also includes a potential return to Manchester United. Cristiano Ronaldo to Rub Shoulders With Lionel Messi at Barcelona? Fans Doubt If This Would Come True! (Read Tweets).

On Wednesday (August 13), Spanish football expert Guillem Balague claimed that Ronaldo was also offered to Barcelona as Juventus want to reduce their high wage bill. Ronaldo earns €23 million at Juventus and in order to lower their wage bill, the club have asked his agent Jorge Mendes to find the Portuguese a new club that can afford his high wages. Balague also claimed that Ronaldo was first offered to Real Madrid but the La Liga champions refused to re-sign him leading to Mendes also contacting Barcelona for a move,

Speculations over a possible transfer to Barcelona already excited the fans, who are eager to see Ronaldo tie-up with Lionel Messi at the same club. Ronaldo’s close circle, however, rubbished those rumours and reinstated that the 35-year-old is happy at Turin. According to a report from AS, Ronaldo and his family “are very happy” in Italy and is not seeking a transfer to any other club. Ronaldo has a contract till 2020 at Juventus.

Balague had claimed that Barcelona and Paris Saint-Germain were among the several clubs agent Jorge Mendes had contacted for a transfer after being told so by Juventus, who want to reduce their wage bill. The reason why Cristiano Ronaldo has been linked to PSG is not so much that PSG are thinking of getting him, it is because Jorge Mendes has been given instructions to find a team for Ronaldo," Balague told BBC Radio 5 Live. "We've seen this in the last six months, he was linked to Real Madrid.

“They said no chance, he's not coming back. And there's been talks about the MLS because Juventus want to get rid of that wage,” he added. "It is as drastic as that. He's been offered everywhere, including Barcelona."

Reports in France football have suggested that Mendes is to meet with PSG’s sporting director Leonardo for a possible transfer to France. Ronaldo is keen to play alongside Neymar and Kylian Mbappe and believes it will be easier to win the Champions League with the French team than with Juventus.

(The above story first appeared on LatestLY on Aug 14, 2020 12:15 PM IST. For more news and updates on politics, world, sports, entertainment and lifestyle, log on to our website latestly.com).