Angry Frank Lampard Asks Liverpool Bench to FU** Off, Gets Into a Row With Jurgen Klopp During Liverpool vs Chelsea, EPL 2019-20 (Watch Video) 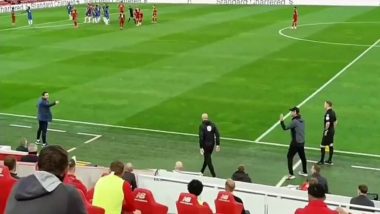 Frank Lampard gets into a heated confrontation with Jurgen Klopp (Photo Credits: Twitter)

Liverpool and Chelsea clashed with each other a couple of days ago at the Anfield Stadium. The game grabbed the headline for Liverpool winning the EPL 2019-20, but an ugly incident made headlines as the managers of the two teams got into a war of words. Frank Lampard was so annoyed that he asked Liverpool players on the bench, "F**k off." He further asked Jurgen Klopp to sit down and not roam around. The incident happened when Naby Keita's opener and saw the red and was adjudged as foul on the area of Chelsea. Liverpool Manager Jurgen Klopp Says ‘Next Season We Will Not Defend Anything, We Will Attack It’.

The decision surely did not go down well with the Chelsea boss and he stood up from his place immediately after the referee's decision and also the hoots from the Reds. He shot up saying, "'How is that a foul? There's no foul there." Lampard ranted while taking steps towards Liverpool boss Klopp and then the fourth official intervened. The more Jurgen Klopp asked him to calm down the more Lampard got irritated. "If he's going off at me I'll f****** say something," said Lampard in a sharp reply. The video of the incident went viral on social media. You can check out the incident below:

Liverpool manager looked enraged but did not move out of his technical area. The drama between the two managers finally subsidised. The match ended with Liverpool thrashing Chelsea by 5-3.

(The above story first appeared on LatestLY on Jul 24, 2020 03:07 PM IST. For more news and updates on politics, world, sports, entertainment and lifestyle, log on to our website latestly.com).