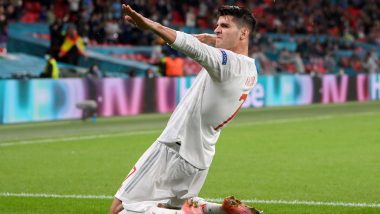 Barcelona are looking to strengthen their forward department for the next summer. Robert Lewandowski is tipped as the Catalans' top priority. However, the club are also looking at other options in case the move for the Polish star fails. Spanish international Alvaro Morata is sounded out as a backup alternative for the Bayern Munich goalscorer. Barcelona Receive Huge Boost In Bayern Munich Star's Pursuit.

According to a report from AS, Barcelona are looking to sign Alvaro Morata. The Catalan club are keeping tabs on the Spanish striker as there is uncertainty about his future. It is understood Arsenal are also interested in signing the forward. Barcelona Deny Meeting With Polish Striker's Agent.

Barcelona have been previously linked with the Spanish international. The Blaugrana looked to sign the striker in January with Xavi asking for his arrival. However, the deal wasn't able to go through as the La Liga outfit then opted to sign Pierre Emerick Aumabeyang.

But with the season coming to an end, Barcelona are once again working on a deal for Alvaro Morata. However, the deal solely depends on the arrival of Robert Lewandoski, who is yet to sign a new contract with Bayern Munich and is looking to leave.

Barcelona's economic situation makes the signing of the Polish star tricky and that is where Alvaro Morata comes in. The Catalan outfit will move for the Spaniard if their pursuit of Robert Lewandowski reaches a dead end.

Alvaro Morata's future is not fully clear but the striker wants regular game time as he looks to make Spain's squad for the 2022 World Cup. He is currently on loan at Juventus from Atletico Madrid but the Italian giants are not willing to pay his €35m release clause.

(The above story first appeared on LatestLY on May 13, 2022 03:13 PM IST. For more news and updates on politics, world, sports, entertainment and lifestyle, log on to our website latestly.com).