Barcelona's winless drought continued as the La Liga leader had to settle for a 1-1 home draw against Atheltic Bilbao, and was only rescued by a late goal from Spanish forward Munir El Haddadi. 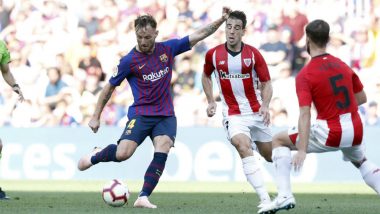 Barcelona, Sep 30: Barcelona's winless drought continued as the La Liga leader had to settle for a 1-1 home draw against Atheltic Bilbao, and was only rescued by a late goal from Spanish forward Munir El Haddadi. Earning just its second point in the last three La Liga games, Barcelona was in danger of losing its grip on the top spot in the Spanish league, pending the outcome of the match between Real Madrid and Atletico Madrid later on Saturday, reports Efe. Spanish La Liga 2018–19 Points Table and Standings: Barcelona Beats Real Sociedad 2–1, Remain Ahead of Real Madrid.

Barcelona's Argentine superstar Lionel Messi stayed on the bench until the 55th minute, and managed to set up the assist to Munir half an hour later, but could not pull off a victory.

Bilbao took control in the first half, as one of its most energetic players in the first 45 minutes, Spanish forward Iñaki Williams, had an opportunity to draw first blood in the 13th minute on a chip that went high. La Liga 2018–19 Points Table & Standings: Spanish League Football Match Results, Schedule, Fixtures of the Current Season.

One minute later, William's teammate Raul Garcia fired but missed the target. At the other end of the field, Barcelona forward Luis Suarez had two scoring chances.

Though Barcelona seemed closer to open the scoring, it was Bilbao who broke the deadlock in the 41st minute as Spanish midfielder Oscar de Marcos seized on a long pass by his fellow Spaniard, winger Markel Susaeta. Bilbao headed to the locker room with a 1-0 advantage thanks partly to Simon, who saved two shots by Brazilian midfielder Philippe Coutinho.

After the intermission, Barcelona coach Ernesto Valverde brought on Sergio Busquets to replace the injured Sergi Roberto in the 51st minute, and Messi took the field four minutes later.

Lionel Messi boosted Barcelona's attacking line, with Coutinho finding a golden scoring chance on a shot in the 63rd minute but the ball hit the crossbar. At this stage, Barcelona put Bilbao's players on their heels, besieging the opponent in its half of the pitch.

The equalizer eluded Messi on two occasions - first on a set piece that De Marcos saved in the 72nd minute, and then on a shot that hit the woodwork in the 77th minute. With six minutes to go before the second-half stoppage time, Barcelona finally drew level when Messi set Munir up for the goal.

(The above story first appeared on LatestLY on Sep 30, 2018 09:26 PM IST. For more news and updates on politics, world, sports, entertainment and lifestyle, log on to our website latestly.com).