Road to FIFA World Cup 2018 in Russia: Belgium topped Group H in the European FIFA World Cup qualifiers with 28 points from 10 matches winning 9 out of the possible 10. 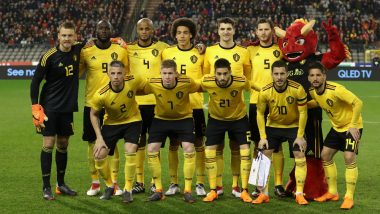 Belgium begin their 2018 FIFA World Cup campaign on June 18 against Panama. According to the football world cup timetable, Belgium will next take on Tunisia on June 23 and England on June 28 in the remaining group stage fixtures of Group G. One of the dark horses of the FIFA World Cup 2018 certainly has to be the Belgium team with its very own Galacticos who have been dazzling the various leagues across Europe particularly the English Premier League. Belgium announced the final 23-man world cup squad and it includes defender Vincent Kompany, 32, who suffered groin injury during a friendly match against Portugal. Here's a look at a Belgium preview with complete schedule timetable, match dates and kick off times. 2018 FIFA World Cup Schedule in IST for PDF Download: Fixtures, Groups, Time Table with Matches in Indian Time & Venue Details of Football WC in Russia.

Although the past has been underwhelming for Belgium with poor performances in the past big tournaments, on paper, they have one of the most formidable team lineups. But the big talking point has to be the coaching staff that includes the man who took Wigan to the FA Cup glory, Roberto Martinez who in turn will be assisted by World Cup winner Thierry Henry. How they cope up with the pressure of a World Cup will be very intriguing to say the least.

Team selection should not be a headache for the duo in truth as for majority of positions the candidates are more or less fixed. Romelu Lukaku and Dries Mertens are sure to lead the line, and they will have Eden Hazard, Kevin De Bryune and Alex Witsel supporting the attack from the midfield. There are multiple players for each position as cover who are potent enough to cope up with any situation. 2018 FIFA World Cup Group G Preview: Schedule Timetable With Match Dates, Venues & Kick-Off Times in IST of Belgium, Panama, Tunisia, and England in Football WC.

The fitness of Vincent Kompany will be crucial for the team as the experienced central defender has a history of fitness issues associated with him. Tottenham Hotspurs duo Toby Alderweireld and Jan Vertonghen are two names which should be a part of the team through their campaign as their rock-solid displays will be vital. Goalkeeping position is another where Belgium has the edge with a world class keeper in Thibaut Courtois.

Belgium topped Group H in the European FIFA World Cup qualifiers with 28 points from 10 matches winning 9 out of the possible 10. Such was their dominance in a relatively easy group with Greece, Bosnia and Herzegovina, Estonia, Cyprus and Gibraltar that they blew away opposition one after the other. Their road in their direct qualification for the FIFA World Cup 2018 had just one stumbling block when Greece managed to hold them to a 1-1 draw at home which hardly had any impact on the final outcome of the qualifiers.

Belgium had a decent run in the 2014 World Cup in Brazil winning all three group matches against Algeria, Russia and South Korea. They defeated the USA in the round of 16 in extra time, and it was the eventual finalist Argentina that knocked them out in the Quarter-Finals.

Romelu Lukaku: The tall and burly striker has had an excellent season for Manchester United scoring 30 goals in 54 matches in his debut season. He also had 11 goals to his name for his country during the European qualifiers for the World Cup. His strong presence and ability to hold play are some of the attributes that make him one of the players to watch out for at the 2018 FIFA World Cup.

Kevin De Bruyne: He was instrumental in Manchester City winning the 2017/18 English Premier League and he goes to the World Cup full of confidence. His set pieces and crossing along with pinpoint passing makes him a lethal cog in the Belgium wheel. He had 13 goals and 19 assists in season fir city which tell us about his all-round game.

(The above story first appeared on LatestLY on Jun 14, 2018 12:00 PM IST. For more news and updates on politics, world, sports, entertainment and lifestyle, log on to our website latestly.com).