How to Watch the Free Live Streaming Online and Football Score Updates of Brighton vs Manchester City, EPL 2018-19 Football Match? 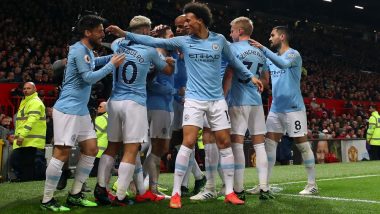 Manchester City leads the title race going into the final game of the season but any slip-ups away at Brighton could hand the title to rivals Liverpool. Pep Guardiola’s City team have won the Carabao Cup and are now focussed on lifting their second trophy. What a pulsating title race it has been between two quality teams showcasing once again why the English is the most competitive one in world football. Brighton have secured themselves Premier League football next season and their only immediate aim would be to be the perfect party-poopers for Manchester City. For Brighton vs Manchester City live streaming online details scroll below. Brighton & Hove Albion vs Manchester City - Live Football Score.

Winger Jose Izquierdo and midfielder Davy Propper are out of the contest leaving a huge void in the Brighton squad. Matt Ryan, who has revealed ahead of the tie that he wants Liverpool to lift the title starts between the sticks for the hosts. If he does want his favourite team to win the championship, he will need to have an extraordinary game. Glenn Murray will be the lone striker and will need the services of Anthony Knockaert and Solly March to create openings.

Fernandinho has been ruled out of the final league game of the season for City with an injury but Belgian playmaker Kevin De Bruyne should take some part in the game. Vincente Kompany whose goal could still be City’s important this season lines up alongside Aymeric Laporte. There is a place in the playing eleven for both Leroy Sane and Raheem Sterling to provide the width with club legend Sergio Aguero the center-forward. City are usually not the team to buckle under pressure but it will be interesting to see their response if they trail in the game.

17th-placed Brighton will host table-toppers Manchester City in the match 386 of English Premier League 2018-19. Brighton vs Manchester City will kick off at 07:30 pm IST (India time) at the American Express Community Stadium.

Where to Watch the Live Telecast of Brighton vs Manchester City, EPL 2018-19 Football Match?

How to Watch the Free Live Streaming Online and Football Score Updates of Brighton vs Manchester City, EPL 2018-19 Football Match?

If you are looking where you can watch the online streaming of the match, then you can log on to Star Sports' live streaming service, i.e. Hotstar. You can also catch the live football score updates of Brighton vs Manchester City on LatestLY, by clicking here. Brighton will make lives difficult for Manchester City but as they have done on countless times this campaign, will find a way to get three points.

(The above story first appeared on LatestLY on May 12, 2019 05:30 PM IST. For more news and updates on politics, world, sports, entertainment and lifestyle, log on to our website latestly.com).