Relegation-threatened Stuttgart secured vital points after holding newly-crowned Bundesliga champion Bayern Munich to a two-all draw in the 33rd round. 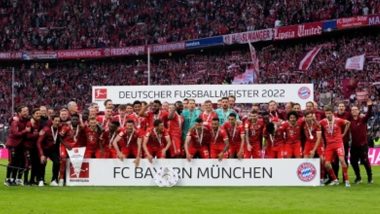 Berlin, May 9: Relegation-threatened Stuttgart secured vital points after holding newly-crowned Bundesliga champion Bayern Munich to a two-all draw in the 33rd round. The Swabians caught a fairy-tale start on the road as Tiago Tomas collected Omar Marmoush's good build-up work at the edge of the box before hammering the ball past Bayern goalkeeper Manuel Neuer into the roof of the net with only eight minutes gone. Man City React to Champions League Exit by Going Three Clear in Premier League.

The German record champions responded with furious attacks as Thomas Muller's volley rattled the woodwork in the 12th minute before Leon Goretzka missed the target from a promising position two minutes later, Xinhua reports. Bayern controlled the proceedings, but Stuttgart remained dangerous and should have made it two following a counterattack, but Marmoush couldn't beat Neuer from close range in the 23rd minute.

Julian Nagelsmann's men eventually got rewarded for their efforts in the 35th minute when Konstantinos Mavropanos cleared Serge Gnabry's shot on target into the wrong goal to restore parity. The hosts gained momentum and rallied back just before the break as Muller benefitted from Dayot Upamecano's assist to slot home the 2-1 lead into the near post corner. Muller remained in the thick of things and had the chance to extend the lead in the 51st minute but the Germany international hit the left post from three metres. Bayern's wastefulness got punished one minute later as Sasa Kalajdzic nodded home Borna Sosa's cross to level the score. Both sides pressed for the winner but both custodians stood firm and ensured a share of the spoils. David Beckham, Charles Leclerc Play Football Ahead Of Miami GP 2022 (Watch Video).

After the draw, Bayern received the 'Meisterschale' in front of the home crowd after having snatched their 10th Bundesliga championship in a row. "We would have liked to spoil Bayern's title party with a win as we had several chances. We put pressure on Hertha Berlin and are of course happy with that one point," said Stuttgart's sporting director Sven Mislintat.  Eintracht Frankfurt and Borussia Monchengladbach played out a 1-1 stalemate as Goncalo Paciencia's long-range effort secured the 'Eagles' one point while Christopher Nkunku's brace helped Leipzig crush Augsburg 4-0.

(The above story first appeared on LatestLY on May 09, 2022 11:38 AM IST. For more news and updates on politics, world, sports, entertainment and lifestyle, log on to our website latestly.com).