Manchester City recovered from their painful Champions League exit to Real Madrid in style to open a three-point gap at the top of the table by defeating Newcastle 5-0 and improve their goal difference with Liverpool. 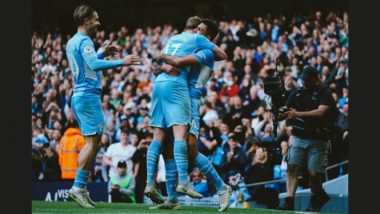 London, May 9  Manchester City recovered from their painful Champions League exit to Real Madrid in style to open a three-point gap at the top of the table by defeating Newcastle 5-0 and improve their goal difference with Liverpool. If there had been any doubt over how Pep Guardiola's men would react to the midweek heartbreak in Madrid, it was dispelled after a lovely move ended with Raheem Sterling putting City ahead in the 19th minute in a late Sunday match. Aymeric Laporte doubled City's lead after 38 minutes after he followed up to score from a loose ball in the penalty area and the result was beyond doubt just after the hour when Rodri headed home following a free-kick. Phil Foden and Sterling rounded off the scoring in injury time and the only worry for Guardiola will be an injury that forced Ruben Dias off at halftime, Xinhua reports.

Liverpool lost ground when they were held 1-1 by Tottenham in a result which helps neither side. Son Heung-Min put Tottenham ahead in the 56th minute, but Luis Diaz levelled with a deflected effort with 15 minutes left to play and although Liverpool had chances to win, they were below their best. The result did neither side any favour and Arsenal took advantage of Tottenham dropping points to open up a four-point lead over their neighbours ahead of Thursday's North-London derby with a 2-1 win at home to Leeds United. Arsenal's job was made much easier by Luke Ayling's 27th-minute red card, but by then they already led thanks to goals from Eddie Nketiah after five and 10 minutes. Arsenal Boost Premier League Top-Four Hopes With 2-1 Win Over Leeds.

Diego Llorente gave Leeds hope with 25 minutes left to play, but it was not enough to lift his side out of the bottom three. West Ham kept their hopes of a quick return to Europe alive as they took advantage of already relegated, Norwich City. Said Benrahma scored twice, while Michail Antonio and Manuel Lanzini also got on the scoresheet in an easy win for David Moyes' team. Manchester United's Champions League hopes ended with a humiliating 4-0 defeat in Brighton, with another poor performance.

Moises Caicedo opened the scoring for the home side in the 15th minute and after Marc Cucurella doubled the home side's advantage in the 49th minute, United fell apart with Pascal Gross and Leandro Trossard adding further goals in the 57th and 60th minutes. Watford's relegation to the Championship was certified by a 1-0 defeat away to Crystal Palace, with Wilfred Zaha's 31st-minute penalty sending down former Palace coach, Roy Hodgson's current side. Burnley's survival hopes were rocked by a 3-1 defeat at home to Aston Villa, who led 3-0 through goals from former Burnley striker Danny Ings, Emiliano Buendia and Ollie Watkins before Maxwell Cornet netted an injury-time goal for the home side. Everton meanwhile took an important step towards safety as they took advantage of tired legs at Leicester City to win 2-1 and climb out of the relegation zone. Atletico Madrid 1-0 Real Madrid, La Liga 2021-22: Yannick Carrasco's Penalty Downs Champions (Watch Goal Video Highlights).

Vitaliy Mykolenko put Everton ahead after just six minutes and although Patson Daka quickly equalized for the home side, Mason Holgate won the game with a header on the half-hour and Jordan Pickford stopped all of Leicester's efforts to get back on level terms. Pontus Jansson and Yoane Wissa scored in the 13th and 14th minutes to put Brentford on track to a comfortable 3-0 win at home to Southampton, with Kristoffer Ajer adding a third goal with 11 minutes still to play. Chelsea seemed to be enjoying a placid afternoon at home to Wolves to celebrate the announcement of the takeover of the club, as they led 2-0 thanks to two goals from Romelu Lukaku. However, Wolves came to life after that Francisco Trincao pulled a goal back in the 79th minute and Conor Coady nodded in an equalizer in the seventh minute of injury time.

(The above story first appeared on LatestLY on May 09, 2022 11:25 AM IST. For more news and updates on politics, world, sports, entertainment and lifestyle, log on to our website latestly.com).