Chelsea have already signed Marc Cucurella for a hefty transfer fee and are looking to bolster their squad even further with the addition of Frenkie de Jong and Pierre-Emerick Aubameyang. 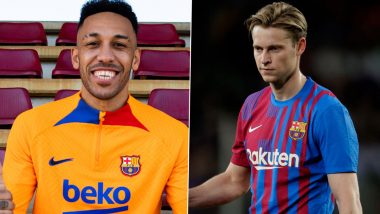 Chelsea have already signed some key players this season but are looking to further strengthen their team as they aim to compete for the Premier League title. The Blues are targeting Barcelona duo Frenkie de Jong and Pierre-Emerick Aubameyang and are hoping to sign the players in this window if Barcelona allows them to leave. Timo Werner Returns to Leipzig From Chelsea With a Four-Year Contract Until 2026.

According to Sky Sports, Chelsea are aiming to land both the players as soon as possible. The Blues have already signed Marc Cucurella and Kalidou Koulibaly for a hefty transfer fee and are looking to bolster their squad even further with the addition of Frenkie de Jong and Pierre-Emerick Aubameyang. Chelsea Set to Submit Fresh Bid to Leicester City For Wesley Fofana.

Barcelona have already agreed an €85 million fee for Frenkie de Jong with Manchester United as they look to sell the midfielder this summer. However, the midfielder is not interested in the move as his priority is continuing with the Catalan club.

The Blaugranas are open to keeping the Dutchman but need to reduce his wages to be able to register new players. However, the 25-year-old is not too keen on re-negotiating his current contract which opens a door for Chelsea to sign the player.

Meanwhile, Pierre-Emerick Aubameyand has found his form at Barcelona as since his arrival in January the Gabon international has scored 13 goals in 23 appearances. The player will fulfil Chelsea's striker needs after they parted ways with both Romelu Lukau and Timo Werner this summer.

It is understood that Frenkie de Jong could be open to a move once his contract with Barcelona is settled. The player prefers a transfer to Chelsea over Manchester United as it offers him a consistent opportunity to play in the Champions League.

However, Pierre Emerick Aubameyang is enjoying life in Barcelona but the arrival of Robert Lewandowski could see him in search of a new club. The Gabon international's game time is set to be reduced significantly after the Pole's arrival and Chelsea could tempt him with a more prominent role in the squad.

(The above story first appeared on LatestLY on Aug 11, 2022 11:58 PM IST. For more news and updates on politics, world, sports, entertainment and lifestyle, log on to our website latestly.com).