Cristiano Ronaldo Poses With Gianluigi Buffon After Winning Serie A 2019-20, Asks Fans to Guess the Number of Trophies The Youngsters Have 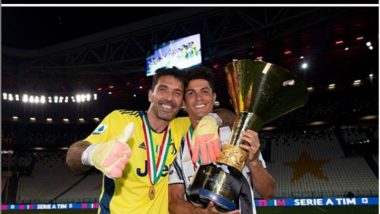 Cristiano Ronaldo and team Juventus have won the Serie A 2019-20. This was the second time that CR7 won the Italian League and team Juventus could not stop celebrating their win. The team kept sharing pictures and video of the Bianconeri picking up the trophy. Now Cristiano Ronaldo posted a picture with their goal-keeper Gianluigi Buffon and asked the fans to guess how many trophies the two youngsters have. The 42-year-old Buffon is the senior-most, member in the active squad of Juventus, but even that this age, he gives youngsters a run for their money. Cristiano Ronaldo Adds Bugatti Centodieci to His Car Collection to Celebrate Juventus’ Serie A 2019–20 Title Win.

Buffon has extended his contract with the Bianconeri and the team will be having the services of the Italian goal-keeper for a year more. The netizens could not stop themselves from commenting on the snap a few of them came up with hilarious responses. Now check out the snap below:

Guess how many trophies these two young men’s won?!🤔 #thestorycontinues

Talking about CR7, he might have lost the Golden Boot race to Lazio's Ciro Immobile but has surely given a lot of happiness for the team. He has scored 31 goals for Juventus. The five-time Ballon d'Or winner is committed to staying at Juventus. On his Instagram post, CR7 hinted to staying with Juventus and said, "Let's go for the third title." Needless to say that his fans would be yearning to see him in action in the Serie A.

(The above story first appeared on LatestLY on Aug 03, 2020 10:07 AM IST. For more news and updates on politics, world, sports, entertainment and lifestyle, log on to our website latestly.com).