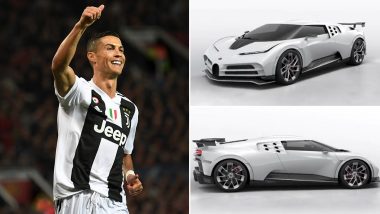 Cristiano Ronaldo has awarded himself with a brand new Bugatti Centodieci after guiding Juventus to the Serie A 2019-20 title. The Portuguese star’s new toy is nothing less than scintillating as Ronaldo bought the car for a whooping £8.5 million as per Corriere della Sera's reports. Well, CR7’s love for cars is not hidden from anyone and the latest addition in his arsenal is as brilliant as his headers. The Centodieci comes with an 8-litre W16 engine which produces energy of 1600 horsepower. Also, the stylish sports car can hit 0-60 mph in just 2.4 seconds while it’s top speed is 236 mph. Cristiano Ronaldo and Steven Gerrard-Admirer Curtis Jones Breaks Through at Liverpool.

Just like most of the supercars, Bugatti has manufactured only 10 models of Centodieci which makes it incredibly 'limited edition'. Notably, Centodieci is not the first member of the Bugatti family to grace Ronaldo’s garage. The legendary striker also owns a Chiron, Veyron and La Voiture Noire. Apart from that, the Juventus also has Phantom Rolls-Royce, Lamborghini Aventador, Ferrari F430 and many other fantastic cars. Meanwhile, let’s look at Ronaldo’s latest toy. Cristiano Ronaldo Loses Golden Boot to Ciro Immobile, to End Season As Europe’s Highest Scorer!

Just as the EB110 was in its day, Centodieci is just as extreme and sporty for its time. Unique, elegant, incomparable. #BUGATTI #Centodieci #BUGATTICentodieci #EB110 #BUGATTI110ans

Speaking of Ronaldo’s performance in Serie A, the striker enjoyed a sensational run by registering 31 goals from 33 games. He might not have got the Golden boot. However, his spectacular show guided the Old Lady to their ninth consecutive Serie A title. The five-time Ballon d’Or was rested from Juventus’ last league game against Roma. However, his next mission will be to guide Juventus to the title in the forthcoming UEFA Champions League 2020.

(The above story first appeared on LatestLY on Aug 02, 2020 12:48 PM IST. For more news and updates on politics, world, sports, entertainment and lifestyle, log on to our website latestly.com).