Juventus star Cristiano Ronaldo is currently letting his hair down in Greece with his girlfriend Georgina Rodriguez. The star footballer paid €20,000 as a tip to Greek hotel staff. 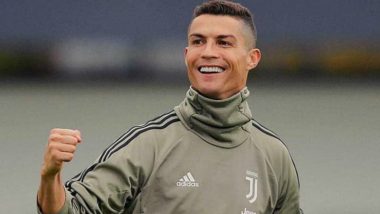 Juventus star Cristiano Ronaldo is currently letting his hair down in Greece with his girlfriend Georgina Rodriguez. Ronaldo, who had a gruelling season at Serie A 2019 and Champions League 2019, was taking the much-needed break with his girlfriend and his friends. Ronaldo’s holiday pics went viral on social media. Reportedly, Ronaldo was quite happy with the services of the hotel and was so impressed that the Juventus football star even went on to pay €20,000 as a tip to Greek hotel staff. Especially because the staff made sure to keep the paparazzi away from the hotel. Cristiano Ronaldo Rape Case: CR7’s Lawyer Looking to Strike ‘Out of Court’ Settlement With Kathryn Mayorga.

It is said that the staff made sure that the footballer’s family and friends enjoy maximum privacy and do not spoil their holiday. For a few days now, CR7’s vacation pictures have gone viral and were shared on social media. Check out a few snaps below:

Holidays with my family in France Riviera Enjoy the views 😀❤️👌🏻☀️⛴

Georgina in the yacht.

Georgina sizzles in a bikini.

Cristiano Ronaldo was in the news for his rape case where it was reported that his lawyers were looking to strike and out of court settlement with Kathryn Mayorga. This would mean that there would be no proceedings conducted and would thus remain private. The proceedings would be intervened by an expert mediator.

(The above story first appeared on LatestLY on Jun 24, 2019 04:16 PM IST. For more news and updates on politics, world, sports, entertainment and lifestyle, log on to our website latestly.com).