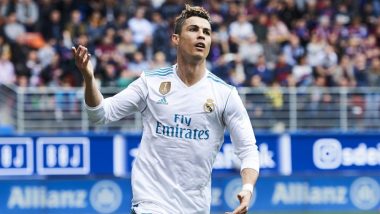 Madrid, July 6: Real Madrid's all-time top-scorer Cristiano Ronaldo is reportedly all set to join Italian giants Juventus this summer. The 13-time and current European champions were expected to hold on to their star striker, with reports suggesting that the 33-year-old Portuguese is close to signing a contract with Juventus and that he has already agreed to a four-year contract worth €30 million per season.

Juventus are also yet to negotiate a transfer fee, which will reportedly be in the €100m - €120m range with Madrid, goal.com reported. The speculations of Ronaldo's Madrid exit ran rife after the third successive Champions League victory over Liverpool in May, where the former Manchester United winger hinted his exit by referring to his time in Santiago Bernebeau in the past tense.

The five-time Ballon d'Or winner also confessed his admiration for the 'Old Lady' after he scored a stunning overhead kick in Madrid's 3-0 victory over Juve in the quarter-finals.

Rumours of the Portugal captain's frustrations in Spain had started doing the rounds after his legal tussle with the Spanish tax Authorities, whom he had to pay a sum of €18.8m to settle a tax fraud case.