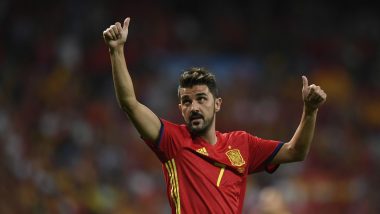 New York, July 23: Spain World Cup winning striker David Villa has been accused of sexual harassment during his stint in the Major League Soccer (MLS), which he has strongly refuted.

After spending trophy-laden spell in Spain with Valencia and Barcelona, Villa moved to the US with New York City FC in 2015 till 2018 before calling time on his illustrious career in Japan with Vissel Kobe.

The allegations were levelled by a Twitter user, who claimed to have interned with NYCFC in 2018.

"The harassment I went through at NYCFC was so bad that now the idea of professional sports terrifies me," read a tweet from the account. "Staying in the field of athletics terrifies me. I'm changing my entire career because the shit they did to me ruined my dreams.

"I thought I was getting the opportunity of a life time when I got that internship. What I got was David Villa touching me every f*****g day and my bosses thinking it was great comedic material. Women brace enough to tell their stories this loudly are my heroes. Someday.

"I still find it hilarious that I was constantly told I had a terrible attitude at that job like I wasn't showing up everyday knowing I was going to be groped or mocked or two hands shoved in the back. Of f*****g course I had a bad attitude," the tweet further read.

Villa's agent released a statement to ESPN on the issue and it read: "I strongly object to the accusations made about me on Twitter. These accusations are entirely false and I deny them.

"I repeat, these accusations are totally false. Harassment is a severe problem for many people. It dishonors those who suffer harassment for others to claim it as an excuse to make false accusations.

"As our legal team works to address these false charges, I ask the media and the public to please respect my right to the presumption of innocence in this matter," the statement added.

(The above story first appeared on LatestLY on Jul 23, 2020 03:41 PM IST. For more news and updates on politics, world, sports, entertainment and lifestyle, log on to our website latestly.com).