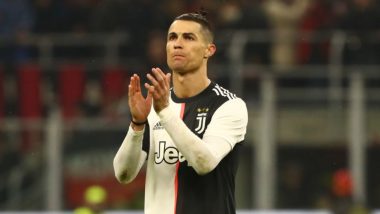 UEFA Champions League is set to resume in August and the competition will be completed in Portugal, mainly Lisbon. The continental tournament was halted amid the coronavirus pandemic and in May the governing body decided to stage the remainder of the UCL 2019-20 season – from quarter-finals onwards – in Portugal. By having all eight teams in the same city, UEFA will be able to monitor the competition closely. Pele Hails ‘Modern Athlete’ Cristiano Ronaldo After Juventus Star Secures Serie A 2019–20 Title.

The final of the biggest club football competition will return in Portugal for the first time since 2014 when Real Madrid defeated Atletico Madrid at Benfica’s Estadio da Luz stadium, a venue for this year’s showpiece event as well. With football fever running high, Daniel Sa, executive director of the Portuguese Institute of Administration and Marketing, said that the country will see a surge in both fans and income. UEFA Champions League: As Teams Find Their Quarters and Semi-Final Rivals, a Look at Winners and Losers From UCL 2019–20 Draw.

According to Sa, Portugal can expect to benefit to the tune of around €50 million in extra income. ‘We believe that we will have more than 15,000 fans, without tickets of course, that are going to gather during these 12 days in the country and basically having fun around the tournament.’ Sa added.

Daniel Sa also stressed on the importance of Cristiano Ronaldo’s Juventus qualifying for the quarter-finals stages. The five-time Ballon d’Or winner started his professional footballing career in Lisbon and fans will surely love to see him back. The Italian side currently trail 1-0 to Lyon after the conclusion of the first leg.

‘Ronaldo is a very big, big brand in Portugal and right now some Portuguese are supporters for Juventus, so I think this could raise the attention in Portugal and raise the economic impact. People are very excited to have the best players in the world for 12 days in the country.’ Sa added.

(The above story first appeared on LatestLY on Jul 29, 2020 11:02 AM IST. For more news and updates on politics, world, sports, entertainment and lifestyle, log on to our website latestly.com).