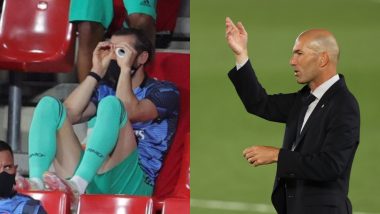 Gareth Bale has not featured for Real Madrid in last some La Liga matches. The 30-year-old has spent his time on the bench by doing some funny antics. Against Alaves the Welshman was seen pretending to be sleep with a protective mask over his eyes and leg on the seats. And now against Granada, when Bale was benched once again, he was seen using a roll of wrist tape as imaginary binoculars. It once again caught cameraman and photographers attention and the pictures are all over the internet. UEFA Champions League: As Teams Find Their Quarters and Semi-Final Rivals, a Look at Winners and Losers From UCL 2019–20 Draw.

Interestingly, Real Madrid’s head coach Zinedine Zidane has reacted to Bale’s antics. “I have no complaints about Bale, absolutely none. We are all in this together and thinking about winning the remaining matches to win La Liga,” Zidane was quoted as saying by metro.co.uk when asked about Bale.

Gareth Bale on the Bench

Gareth Bale on the bench for Real Madrid is having the time of his life 😂 pic.twitter.com/Hu676lD8bc

This comes at a time when it is being reported that Bale no more fits in Zidane’s plans. The 30-year-old is on a £600,000-a-week contract at Madrid till 2022 and interestingly hasn’t featured for full 90-minutes since January. Fans go Berserk With Possibility of Real Madrid vs Juventus in the Champions League 2019-20, Netizens Express Their Excitement on Social Media.

Following the 2-1 win over Granada, Los Blancos are now one victory from guaranteed La Liga title. The win was Madrid’s ninth in a row as they stay on top of the points table with four points clear of Barcelona. Real Madrid now takes on Villarreal and Leganes, and a victory in one of these games will help them win the title.

(The above story first appeared on LatestLY on Jul 14, 2020 05:42 PM IST. For more news and updates on politics, world, sports, entertainment and lifestyle, log on to our website latestly.com).