Fans go Berserk With Possibility of Real Madrid vs Juventus in the Champions League 2019-20, Netizens Express Their Excitement on Social Media

The impending matches of the Champions League 2019-20 were announced today and it brought up a possibility of Cristiano Ronaldo‘s team Juventus facing his former club Real Madrid in the quarter-finals. The two teams will only come across each other if the Bianconeri manage to defeat Lyon in the Round of 16 and the Old Lady would face the winner of Real Madrid vs Manchester City. 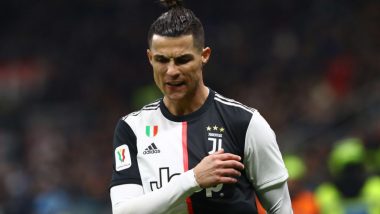 Thus they posted their excitement on social media via tweets. The fans had already assumed about how the two teams would battle it out on the middle if at all they locked horns with each other. This season's quarter-finals, semi-finals and final will be played as a straight knockout tournament and will be hosted in Lisbon, Portugal. The matches will happen in August. The draw for quarter-final and semi-final of the competition. Now let’s have a look at the tweets below:

imagine Real Madrid vs Juventus on UCL Quarter Final And Ronaldo Diving For Penalty.. and ramos push him like he did suarez back in 2017

Maybe an other reunion pic.twitter.com/hTbPJRKLWM

RM Vs Juve will be exciting 👀

Meanwhile, CR7’s long-standing rival, Lionel Messi’s Barcelona could be facing Frank Lampard's Chelsea or Bayern Munich, who are both in good form. However, the team is yet to play against Napoli in the round of 16. RB Leipzig will be coming across the tough nuts as they would be locking horns with Atletico Madrid.

(The above story first appeared on LatestLY on Jul 10, 2020 09:51 PM IST. For more news and updates on politics, world, sports, entertainment and lifestyle, log on to our website latestly.com).