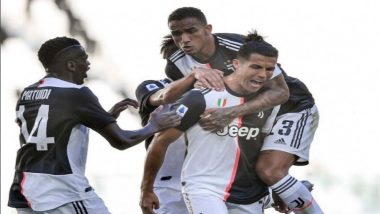 Juventus will eye overturning a 0-1 deficit when they host Olympique Lyon in the second leg of their UEFA Champions League last 16 clash. Lucas Tousart’s first-half goal was enough for a Lyon win in the first-leg and the French side will hope they can hold to that lead against Cristiano Ronaldo and co in Turin. Juventus head into the UCL 2019-20 home fixture on the back of three defeats from their last four Serie A matches. Meanwhile, fans in India searching for how to watch Juventus vs Lyon match should scroll down for all details, including live telecast, online live streaming and live score updates for the clash. Juventus vs Lyon, UEFA Champions League 2019–20: Cristiano Ronaldo, Jason Denayer and Other Players to Watch Out.

Lyon, who finished eighth in the Ligue 1 table after it was cancelled due to COVID-19, recently returned to competitive football. They played PSG in the Coupe de la Ligue final and lost on penalties. They have also played few friendlies and won matches over Nice, Celtic and Gent. They lost 2-0 to Rangers. Juventus, meanwhile, return after a 1-3 loss to AS Roma in their final league match. Juventus vs Lyon, UEFA Champions League Live Streaming Online.

Juventus vs Lyon match in UEFA Champions League 2019-20 will take place on August 08, 2020 (Friday midnight). The match will be played at the Allianz Stadium and it is scheduled to start at 12:30 am IST (Indian Standard Time).

Fans in India can catch the live action of Juventus vs Lyon match on Sony Sports channels. Sony Pictures Sports Network (SPSN) is the official broadcaster of UEFA Champions League 2019-20 in India. Fans need to tune into Sony Ten channels to live telecast the round of 16 match on their television sets. Those looking for online options can also catch the live action on online platforms. SonyLiv will be live streaming the game online for its fans in India. Cristiano Ronaldo and Juventus fans can watch it live on the SonyLiv app or on the website.

(The above story first appeared on LatestLY on Aug 07, 2020 11:30 PM IST. For more news and updates on politics, world, sports, entertainment and lifestyle, log on to our website latestly.com).