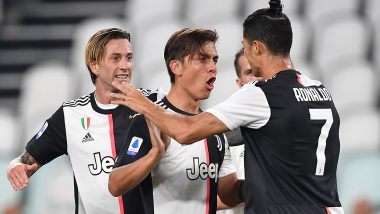 Juventus vs Lyon, UEFA Champions League 2019-20 Live Telecast and Free Online Live Streaming: Juventus are in a precarious situation against Lyon in the UEFA Champions League with them needing a massive performance in Turin to qualify to the next round. Although they trail the French club by a solitary goal, it is their poor form which is a huge worry for Maurizio Sarri. Despite being crowned champions, there have been far too many instances of the Bianconeri getting beaten by their oppositions this term. Lyon finished seventh in the French Ligue 1 and have not been consistent performers in this campaign. Juventus vs Lyon Dream11 Prediction in UEFA Champions League 2019–20.

Matthijs de Light will make his return to the starting eleven after being given off by gaffer in the last game. The young Dutch defender has been troubled by a shoulder problem for the majority of the season but is ready to risk it all against Lyon. Cristiano Ronaldo and Paulo Dybala have a lot riding on their shoulder as the hosts look for goals. Ronaldo is an absolute goal-scoring machine when it comes to the Champions League but needs his midfield to support him. Miralem Pjanic could be handed a start in the middle of the park despite signing for Barcelona in order to add quality. Juventus Announces 22-Member Squad for Their Match Against Lyon in the Champions League 2019-20, Sam Khedira Out.

Lyon will opt for a five-man midfield in order to neutralise Juventus’ creative players with the likes of Bruno Guimaraes sitting on top of a three-man defence. Moussa Dembele and Memphis Depay make up for a dangerous forward duo which will keep the home side’s defence on their toes. Leo Dubois and Maxwel Cornet like to push on and join the attack with every opportunity possible but they will be advised to maintain the defensive shape of the team.

Juventus vs Lyon match in UEFA Champions League 2019-20 will take place on August 08, 2020 (Friday midnight). The match will be played at the Allianz Stadium in Turin and the game has a scheduled start time of 12:30 am IST (Indian Standard Time).

Live-action of Juventus vs Olympique Lyon match will be available on Sony Sports channels. Sony Pictures Sports Network is the official broadcaster for UEFA Champions League 2019-20 in India. Fans can tune into Sony Ten channels and live telecast the second leg of the round of 16 match on their television sets.

Fans can also follow live action on online platforms. SonyLiv, the online media of Sony Sports Network, will be live streaming the Juventus vs Lyon match online for its fans in India. As the game progresses, the pressure will mount on Juventus if they fail to get an early goal. Lyon look likely to progress on away goal rules.

(The above story first appeared on LatestLY on Aug 07, 2020 06:10 PM IST. For more news and updates on politics, world, sports, entertainment and lifestyle, log on to our website latestly.com).