Juventus vs Lyon, UEFA Champions League 2019–20: Cristiano Ronaldo, Jason Denayer and Other Players to Watch Out in JUV vs LYN Football Match

Juventus vs Lyon is scheduled to take place on Friday night (August 7, 2020) at the Allianz Stadium in Munich. The Old Lady are contesting for their first Champions League crown since 1995 and will aim to register an emphatic victory in the upcoming game. On the other hand, Lyon must back themselves to upset Maurizio Sarri's men in their own den. 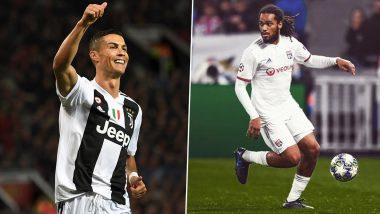 After conquering the Serie A 2019-20 title, Juventus are set to host Olympique Lyon in the second leg of their UEFA Champions League Round of 16 tie. The match is scheduled to take place on Friday night (August 7, 2020) at the Allianz Stadium in Munich. The Old Lady are contesting for their first Champions League crown since 1995 and will aim to register an emphatic victory in the upcoming game. On the other hand, Lyon must back themselves to upset Maurizio Sarri's men in their own den. Below, we’ll look at some players who can come good in the upcoming match. JUV vs LYN Dream11 Prediction in UEFA Champions League 2019–20.

Juventus might step into the game as firm favourites. Their recent performances, however, have been underwhelming. They have lost three of their last four games but will want to get back to the winning ways. On the other hand, the visitors, who defeated Metz in the first leg, can’t be taken lightly. Meanwhile, as the Juventus vs Lyon match takes a countdown, let’s look at some key players who leave can leave a mark in the game. Cristiano Ronaldo Sweats it Out in the Nets Ahead of Juventus vs Lyon.

The Portuguese star will undoubtedly be the biggest nemesis for the visitors. Ronaldo played a crucial role in making Juventus the Italian champions for the ninth straight time and will like to extend his good form. Since the restart of the season, the five-time Ballon d’Or winner registered 21 goals and the opposition team must be aware of the fact.

In order to keep CR7 away from the nets, Denayer will certainly have to come good in the upcoming game. The former Manchester City centre-back has been a rock for Lyon at the back and was critical to his side’s recent wins. However, with Juventus having the services of Ronaldo and Dybala, the Belgian defender has a very little margin of error.

The Argentine professional has been the unsung hero of Juventus in recent times and will be determined to leave a mark in the forthcoming clash. However, Dybala, who missed the last two games for the Old Lady, is doubtful for the upcoming match. With Lyon not being a great threat, the 26-year-old might not take the field. If he does, however, he’ll certainly aim to send the ball to the nets.

With regular captain Memphis Depay back in the side, Lyon will certainly take the field with confidence. The Dutchman plays as a central forward on most occasions. Due to his recent injuries, however, the 26-year-old is likely to play the role of the left against Juventus. Nevertheless, he is known to breach great defences as the home team must vary him.

Speaking of the head-to-head records, Juventus have clearly dominated the contests when these two sides have faced off in the past. In the six games played between them, the Italian champions have registered emphatic victories on four occasions while one match went on Lyon.

(The above story first appeared on LatestLY on Aug 07, 2020 04:03 PM IST. For more news and updates on politics, world, sports, entertainment and lifestyle, log on to our website latestly.com).