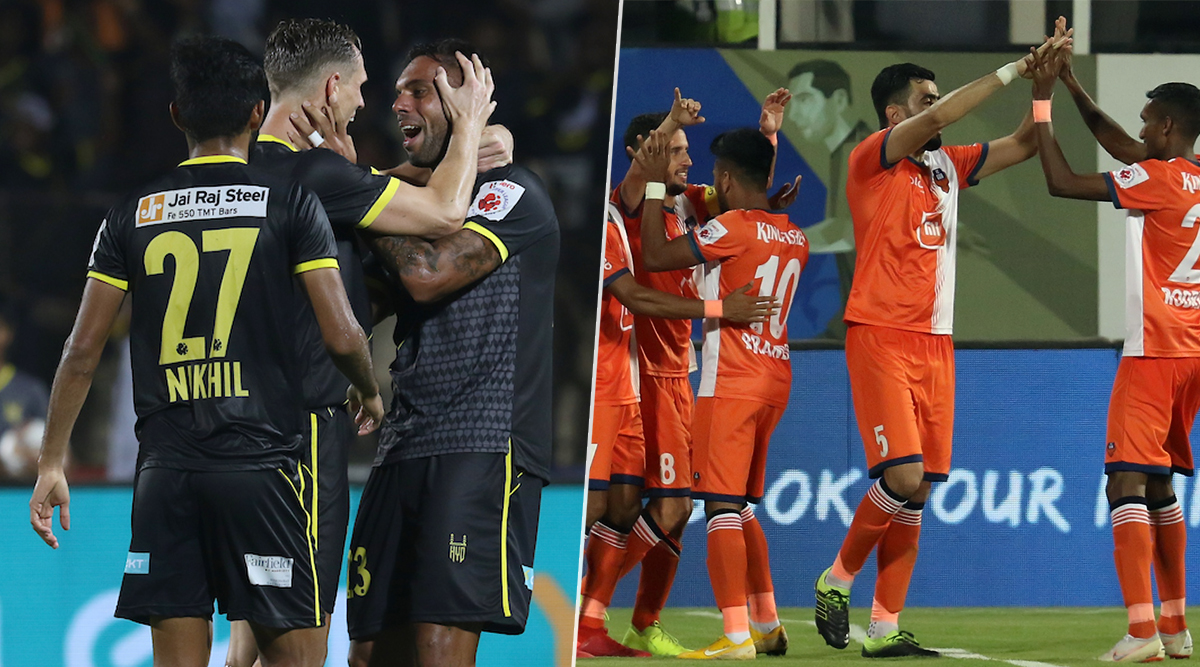 Hyderabad FC vs FC Goa, Indian Super League 2019-20 Free Live Streaming Online and Live Telecast: One aims for their second consecutive ISL final, another trying hard to get back into winning ways and avoid the wooden spoon. And that is how the match would be framed when FC Goa meets Hyderabad FC at the Gachibowli Stadium on December 08, 2019 (Sunday). Fans searching for live telecast, online live streaming and score details for HYD vs FC game in ISL 6 will find all relevant information on this page. Both sides fought back and scored dramatic extra-time equalisers to salvage a point from losing situations in their previous games and are winless in their last two of which one have been defeats each. Meanwhile, for complete live telecast, free online live streaming and score details of Hyderabad FC vs FC Goa ISL 2019-20 encounter, please scroll down. Hyderabad FC Vs FC Goa - Live Football Score.

FC Goa will once again be without ISL’s highest-scoring striker Ferran Corominas for a third straight match. They have failed to win on most occasions without the Spaniard leading their attack and it has been the same story this season with Sergio Lobera’s side losing 0-1 to Jamshedpur and fighting back from a near defeat to hold Kerala Blasters to 2-2 draw in the two games that Coro missed. But the last season’s runner-up will welcome Seminlen Doungel, Hugo Boumous and Ahmed Jahouh into the squad after their suspension period. Doungel and Boumous served two-match bans for an off-the-ball incident with NorthEast United player, while Jahouh was shown sent-off against Jamshedpur. Moturda Fall, who received a straight red against Kerala, is suspended for this game.  HYD vs FCG Dream11 Prediction in ISL 2019–20: Tips to Pick Best Team for Hyderabad FC vs FC Goa.

Likewise, Hyderabad will also miss Sahi Panwar and Gurtej Singh to suspensions. The former was asked to march in the opening half against Bengaluru FC and is suspended for one game, while Gurtej is out after accumulating three yellow cards in successive matches. Asish Rai, whose rebounded shot off made space for Robin Singh to score the all-important equaliser against defending ISL champions Bengaluru FC, is expected to start. Jamaican striker Giles Barnes could make an off-the-bench cameo. FC Goa Look to Get Back to Winning Ways in Hyderabad.

Hyderabad vs FC Goa match in ISL 6 will be played on December 08, 2019 (Sunday). HYD vs FCG ISL 2019-20 encounter will take place at the Gachibowli Stadium in Hyderabad and is scheduled to start at 07:30 pm IST (Indian Standard Time).

Fans can also watch the Hyderabad vs FC Goa ISL match on online platforms. Hotstar, the official online media streaming platform of Star, will be live streaming the HYD vs FCG game online for its fans in India. Meanwhile, football followers can also follow LatestLY for the live score updates of HYD vs FCG encounter and every other ISL 2019-20 match.

FC Goa will hope to beat the bottom-placed Hyderabad FC and re-enter the top four of ISL 6 table standings. They have nine points from six games and are ranked fifth in the table. Hyderabad FC from the same number of games have four points with just one win, draws and four defeats.