Indian Super League 2020-21 begins on November 20 with Kerala Blasters taking on ISL debutant ATK Mohn Bagan in the opening day clash. The ISL will be an 11-team league from this edition with SC East Bengal and ATK Mohun Bagan joining the band. Teams will hope to not only finish within the final four but will fight for the top place. 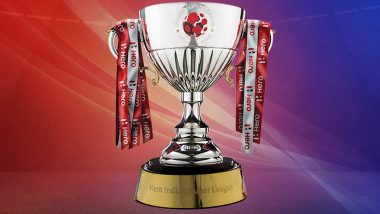 Mumbai City FC defeated ATK Mohun Bagan 2-0 on the final day of the league stage to secure top spot in the team standings and secure a place in AFC Champions League. Sergio Lobera's team will face FC Goa in the semi-finals, who secured their spot after a 0-0 draw against Hyderabad. Meanwhile, Mohun Bagan will take on NorthEast United in the final four clash. Check out ISL 2020-21 points table. ISL 2020-21 Full Schedule For Free PDF Download had Online: Time Table With Date & Match Time In IST, Venue Details, Fixtures of Indian Super League 7

Season 7 of the Indian Super League (ISL) kicked off on November 20 with two-time ISL finalists Kerala Blasters playing debutants ATK Mohun Bagan in the opening match. ISL 2020-21 will run for a period of five months and is expected to end in mid-March. ATK were the defending champions after they beat Chennaiyin FC 3-1 in the final last season. This season though they have merged with I-League champions Mohun Bagan to form a new club ATK Mohun Bagan, who will be making their ISL debut this season. Their Kolkata rivals SC East Bengal will also be making their ISL debut this season making the ISL an 11-team league from this edition. The other teams in the league are – Bengaluru FC, Chennaiyin FC, FC Goa, Jamshedpur FC, Kerala Blasters FC, Mumbai City FC, NorthEast United FC, Hyderabad FC and Odisha FC.

This season the entirety of the ISL will be played in Goa across three venues. Fatorda Stadium, Bambolim and the Tilak Maidan Stadium will be hosting all the matches of ISL. Since the league will be played amidst the COVID-19 pandemic, teams, referees and those operating within the league will have to stay and operate under a secure bio-bubble. Each club has been allowed to sign a minimum of five and a maximum of seven foreign players with at least one from an AFC-affiliated country. The size of the squads has been increased to 35 with teams now allowed to register at least 35 players in their squads. The number of substitutions has also been increased from 3 players to 5 players in all matches. Games will be held behind closed stadiums and without fans.

ATK FC, now defunct, are the most successful team in ISL history with three title wins in six seasons of the ISL. Chennaiyin FC have lifted the ISL title twice while Bengaluru FC have won the title once in the competition’s history. Kerala Blasters and FC Goa are two-time losing finalists. ATK won the inaugural edition in 2014 and followed it with title wins in 2016 and 2019-20. Chennaiyin FC won the ISL in 2015 and 2017-18 while Bengaluru FC clinched their maiden ISL title two seasons ago.

(Points Table Will Be Updated After The Match)

Football Table Abbreviations and Their Meaning

Like all previous seasons, each team will be awarded three points for a win and one point for a draw. In case of a washout or match cancellation, each team will share a point each. Each team will play 20 matches in home and away formats in the league phase with the top four teams advancing to the ISL playoffs. The team at the top of the points table at the end of the league phase will be awarded a League Winners Shield and will also qualify for the group stages of the AFC Champions League in addition to the ISL semi-finals.

This was introduced last season and FC Goa became the first Indian team to advance into the AFC Champions League group stages. The top-four teams will then clash in a two-legged semi-finals with the winners meeting in the summit clash. The winning team of the ISL will progress to the AFC Cup qualifiers.

(The above story first appeared on LatestLY on Dec 12, 2020 09:43 PM IST. For more news and updates on politics, world, sports, entertainment and lifestyle, log on to our website latestly.com).