The English midfielder had lashed out at the referee after he awarded a penalty to Bayern Munich which eventually helped them beat Dortmund in the Bundesliga. A criminal complaint has been lodged and the police are investigating the matter. 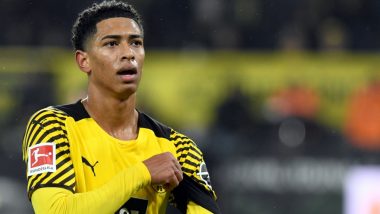 Jude Bellingham was not a happy man after Borussia Dortmund lost to Bayern Munich in a closely fought encounter few days ago and the English midfielder directed his criticism towards referee Felix Zwayer, who oversaw the game which ended 3-2 in favour of the German champions. Bellingham specifically referred to an incident about the referee giving away the match-winning penalty to Bayern when it should not have been a foul in the first place. Robert Lewandowski stepped up to score from the spot subsequently and clinch his team the win against his former side.  Lionel Messi’s ‘Struggles’ at PSG Revealed by Former Barcelona Teammate and Friend Luis Suarez

"You give a referee, that has match fixed before, the biggest game in Germany, what do you expect? For me, it wasn't [a penalty]. He [Hummels] is not even looking at the ball and he's fighting to get it and it hits him. You can look at a lot of the decisions in the game," Bellingham said, as quoted by ViaPlay. The youngster drew reference to Zwayer's involvement in a match-fixing scandal dating back to 2005, which was followed by a six-month ban.

The police are now investigating Bellingham's comments after a criminal complaint was lodged. A decision on this incident is expected soon.

The match was a heated contest between both these sides and even Dortmund coach Marco Rose got involved, protesting against the penalty. Rose was eventually sent off. Zwayer, while reacting to his decision, said, "I see in the game that it's about a touch by Hummels. The question for me was: Is the arm stretched away from the body or not? In real-time, it was not clear whether his arm was moved towards the ball. I checked it with [VAR officials] in Cologne and then the arm position was checked. The video assistant made an assessment for himself and said that Hummels had his arm away from the body in an unnatural position. In the end, he clearly deflected the ball with his elbow and I came to the decision that it was a penalty."

(The above story first appeared on LatestLY on Dec 06, 2021 05:25 PM IST. For more news and updates on politics, world, sports, entertainment and lifestyle, log on to our website latestly.com).