Lionel Messi has found it a bit difficult to recreate the form he was known for having in La Liga and now his former teammate and close friend Luis Suarez has revealed that the recently crowned Ballon d'Or 2021 title winner is 'suffering' in PSG. 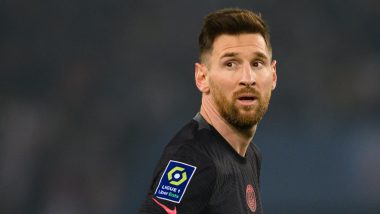 Lionel Messi made headlines all over the world when he moved to PSG from Barcelona in the summer transfer window but Luis Suarez, who is not just his former teammate but also a close friend, revealed that the Argentine is 'suffering' in France. Messi, despite all his talent and skill, has not yet been at his best for his new side. Suarez and Messi were strike partners at Barcelona, where the duo dominated La Liga for a considerable amount of time. Lionel Messi’s Father Jorge Takes a Sly Jibe at Critics After Cristiano Ronaldo Supported the Claims of Argentine 'Stealing Away' Ballon d’Or 2021

Suarez, who now plies his trade for Atletico Madrid, in interaction with TNT Sports, said, "We talk every day, we always try to avoid expectations because we are players and we know how we have to act in those moments, we talk about the games, about the family. He told me that when he is playing in the cold, he suffers a lot and with the snow. You have to get used to what the cold weather there is like." Cristiano Ronaldo Publicly Backs the Claims of Lionel Messi ‘Robbing’ Ballon d’Or 2021 From Him and Robert Lewandowski

The Argentine, who is now a record seven-time Ballon d'Or winner, had a delayed start to his life as a PSG player as he returned to the club after winning the Copa America 2021 trophy with Argentina earlier this year. He took a while to get off the mark and has so far managed to score four goals and three assists for the French giants. He has however, failed to score consistently though.

(The above story first appeared on LatestLY on Dec 05, 2021 09:34 PM IST. For more news and updates on politics, world, sports, entertainment and lifestyle, log on to our website latestly.com).