Juventus Suffers From a Shocking Defeat Against Udinese in Serie A 2019-20 Game, Fans Want Maurizio Sarri To Quit Bianconeri 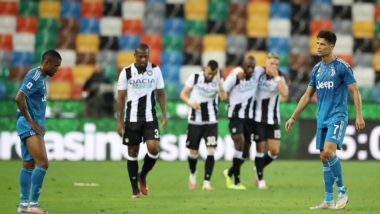 After flying high against Lazio and winning the match by 2-1, Juventus suffered from a shocking defeat against Udinese. Juventus was hosted by Udinese at the Dacia Arena and the result of the match came in as a jolt to the team. A few netizens blamed the poor tactics of the team and the weak defensive line-up, many others blamed the manager of Juventus Maurizio Sarri. They said that the current Juventus manager needs to make a way out of the club. The Bianconeri lost the game against Udinese by 1-2. Cristiano Ronaldo Has an Important Message for Team as Juventus Inches Closer to Clinch Serie A 2019-20.

The match started off with no goals scored in the first 41 minutes of the match. Matthijs De Ligt was the one who scooped into the nets at the 42nd minute of the match. Exactly 10 minutes later Ilija Nestorovski brought in an equaliser. When Cristiano Ronaldo and Paulo Dybala just started attacking, the weak defence line ruined it all. The final nail in the coffin was hammered by Seko Fefona at the92nd minute. Now, check out the tweets below:

Wtf is wrong with juve.Douglas Costa is busy in showing his skills rather than playing a clean passing game.This team is just to difficult to understand.Inconstitent more than test marks.Why the hell did Rugani even play?Why did Cristiano even join this team?

please don't send coach sarri to training ground, just play him some wild animal films to know how to finish a kill. 🦓🦁🐯#يوفنتوس_اودينيزي

It's not about "don't worry we're still at the top and 7+ clear" but look at how they play this game. Never learn, never change, never improve.

Sarri out! This is a worse Juve i've seen in years! Par with Del Neri's.

The team will have to wait for the home fixture against Sampdoria to clinch their ninth title. Commenting on the same Sarri explained after the match, "It’s difficult to find balance at the moment, as everyone in every team is getting tired. We’re also not as aggressive because of that, but I believe organisation is more important than aggression right now. It’s more mental fatigue than physical, as we lost our cool after the equaliser." The team will play their next fixture on July 27, 2020, against Sampdoria.

(The above story first appeared on LatestLY on Jul 24, 2020 09:05 AM IST. For more news and updates on politics, world, sports, entertainment and lifestyle, log on to our website latestly.com).