PSG are still working on convincing Kylian Mbappe to extend his stay with the club. And the Parisian giants have offered the world cup winner a new mega-contract, which they believe will be enough to change his mind. 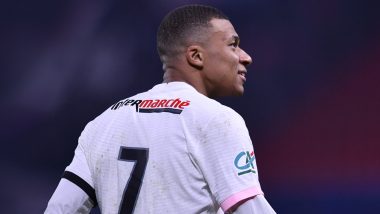 Kylian Mbappe’s future at Paris Saint Germain remains uncertain. The Frenchman is in the final few months of his current contract with the Parisian giants. And with Real Madrid interested in signing the world cup winner, he is yet to sign a new deal with the Ligue 1 club. The striker has been in sensational form this season scoring 24 goals in 34 games in all competitions. Kylian Mbappe Transfer News Latest Update: PSG Step Up Efforts For Contract Renewal Amid Real Madrid Interest.

However, PSG are still working on convincing Kylian Mbappe to extend his stay with the club. According to AS, the Parisian giants have offered the world cup winner a new mega-contract, which they believe will be enough to change his mind.

It is understood that the said deal will reportedly include a €200 million signing bonus as part of his loyalty to the club. The offer will also see the world cup winner earn around €50 million a season for the duration of the two-year contract.

It is also understood that PSG have reportedly included a release clause that activates in 2024 if the player wishes to depart the club. The club has also guaranteed that the Frenchman can participate in and represent France in the 2024 Summer Olympics in Paris.

There are several reports from France suggesting that despite Kylian Mbappe not being completely decided on his future, renewing with PSG is a huge possibility. The striker’s mother wants the player to stay in Paris and has been the most receptive to the new deal. The Frenchman’s representative recently met PSG’s hierarchy.

Kylian Mbappe tried to leave the club last summer and wanted to join Real Madrid. But PSG were not willing to let go of their star man and reportedly denied multiple bids from the Spanish giants including a fee of €200 million.

(The above story first appeared on LatestLY on Mar 02, 2022 03:43 PM IST. For more news and updates on politics, world, sports, entertainment and lifestyle, log on to our website latestly.com).