Paris Saint Germain are stepping up their efforts to renew Kylian Mbappe’s contract. The 23-year-old recently became the second-highest goalscorer in the club’s history and has been one of their star performers this season. 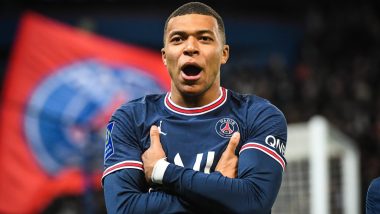 Kylian Mbappe’s future remains unresolved as the young forward continues to impress with his performances on the field. The World Cup winner is in the final few months of his contract with PSG and will be able to walk away for free in the summer. The striker is yet to agree on a deal amid interest from Spanish giants Real Madrid. Kylian Mbappe Transfer News: Real Madrid Prioritise Frenchman Over Other Signings.

According to a report from Marca, Paris Saint Germain are stepping up their efforts to renew Kylian Mbappe’s contract. The 23-year-old recently became the second-highest goalscorer in the club’s history and has been one of their star performers this season.

Despite him being a key figure in the PSG team, Kylian Mbappe is yet to sign a new deal. Paris Saint Germain hierarchy on occasions have expressed their desire for the young Frenchman’s continuity at the club and are doing everything possible to extend his stay.

The 23-year-old wanted to leave the club last summer but PSG were not willing to part ways with their star man. The Parisian club refused multiple bids from Real Madrid including a massive fee of 200 million for the forward.

However, with Kylian Mbappe still not agreeing on a new deal, it looks certain that he will be departing the club in the upcoming transfer window. Real Madrid are his preferred destination as the Spanish giants have also made signing the world cup winner their top priority.

It is understood that Real Madrid president Fiorentino Perez wants the Frenchman to be the club’s marquee signing. Los Blancos plan on building their squad around the world cup winner for years to come.

(The above story first appeared on LatestLY on Mar 01, 2022 01:19 PM IST. For more news and updates on politics, world, sports, entertainment and lifestyle, log on to our website latestly.com).