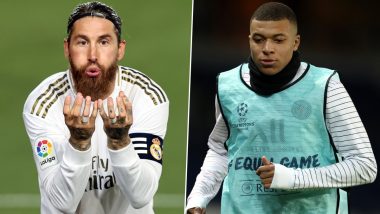 Real Madrid are looking for a fresh start after a trophy-less season and have already started making moves in the transfer market. The record Spanish giants have already announced new arrivals and some major departures are also expected with captain Sergio Ramos tipped as one of the firsts to leave. However, the club and Spanish defender's association is set to end on bitter terms due to the 35-year-old’s reported involvement in Kylian Mbappe’s deal. Kylian Mbappe Transfer Update: PSG Forward Could Sign Up with Real Madrid or Liverpool.

Sergio Ramos has been at Real Madrid for 16 seasons but is tipped to leave as the world cup winning defender is yet to sign a new contract with his current deal with the club ending on June 30. The 35-year-old was given a one-year extension with a pay cut but refused to accept the terms as he wanted a two-year extension with an increase in his wages. PSG Step Up Interest In Real Madrid Skipper As Contract Renewal Stalls.

So with the two parties failing to reach an agreement yet, it looks highly certain that Ramos and Madrid will part ways in the summer and the separation is set to be an unpleasant one as Real Madrid are angry at the defender for trying to sabotage their attempts to sign Kylian Mbappe, as reported by Jose Ramon de la Morena of El Transistor OC.

It is understood that Sergio Ramos has called some of his Real Madrid teammates, asking them not to take a pay cut as the club are only doing it so they can afford to sign Kylian Mbappe in the summer from PSG, with whom the defender is heavily linked.

Real Madrid have been affected heavily by the coronavirus pandemic and are looking to free up spaces in their team by off-loading some players. Sergio Ramos is yet to renew his contract and looks certain to walk away in the summer and Los Blancos have already signed his replacement in David Alaba, who arrived from Bayern on a free transfer.

(The above story first appeared on LatestLY on Jun 02, 2021 05:27 PM IST. For more news and updates on politics, world, sports, entertainment and lifestyle, log on to our website latestly.com).