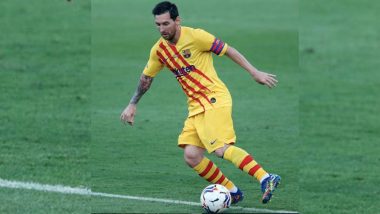 Lionel Messi first applied to trademark his surname for sportswear in 2011 to the European Union Office for Intellectual Property. However, the ruling was done against the Argentine footballer stating that the dominant elements of his surname ‘Messi’ and the cycling company’s name ‘Massi’ are almost identical visually and phonetically. Lionel Messi Scores Twice As Barcelona Beat Girona in Pre-Season Friendly (Watch Goal Video Highlights).

EUIPO said that only the people aware about the two would be able to differentiate between the names however, EU’s General Court disagreed. The Court stated that the Barcelona skipper is too well-known around the world this kind of confusion to arise. The 33-year-old is one of the highest-paid athletes in the world and is also seventh on the list of the most followed celebrities on Instagram.

‘The football player's fame counteracts the visual and phonetic similarities with Massi. Mr Messi is, in fact, a well-known public figure who can be seen on television and who is regularly discussed on television or on the radio’ the court said in their ruling on Thursday.

Lionel Messi was among the news in recent weeks for his uncertain future with Barcelona, a club he has spent two decides at. The Argentine wanted a move away from the Catalan giants for free in the summer but was forced to stay as the Spanish side stated that the ‘free clause’ in his contract had expired.

(The above story first appeared on LatestLY on Sep 18, 2020 11:50 AM IST. For more news and updates on politics, world, sports, entertainment and lifestyle, log on to our website latestly.com).