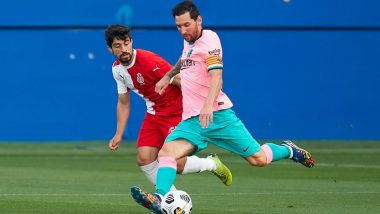 Lionel Messi seems to be finding his form ahead of the new season after only returning to team training last week after the transfer saga. The Argentine scored twice and played a crucial role in Philippe Coutinho’s opener during a recent friendly match against Girona. The Spanish side defeated their opponents on the day 3-1 to win their second friendly game under new manager Ronald Koeman. Lionel Messi Shares Video Showcasing His 20-Year Love Affair With Barcelona After Deciding To Stay With Catalan Giants.

Lionel Messi has decided to stay at Barcelona and looks to be a crucial part of Ronald Koeman’s rebuilding plan. The Dutch manager deployed Lionel Messi in the centre of the attack (false nine), a position he hasn’t played since the arrival of Luis Suarez in 2014 The Argentine, despite little match fitness looked sharp while leading the team’s attacking play. Lionel Messi Reportedly Called Javier Ribelles an As**ole During Barcelona’s Friendly Game Against Gimnastic.

The Argentine scored his first of the game in the 45th minute of the match, spinning on the edge of the box and unleashing a well-placed shot from his weaker right foot to give Girona keeper no chance in the goal. His second strike came just after the half-time interval via a deflected shot. The Barcelona skipper was then replaced by Ousmane Dembele past the hour mark.

Philippe Coutinho scored the other goal of the game. Lionel Messi also played a huge part in setting up the opener as he found new signing Francisco Trincao with a wonderful pass before the Portuguese set up the Brazilian, who finished in front of a relatively empty net.

This was Barcelona’s second friendly game of the pre-season preparations as the Catalan giants defeated Gimnastic by the same scoreline last week. Several youngsters were given a chance by Ronald Koeman during the game, who impressed as well. But Luis Suarez and Arturo Vidal were not part of the game-day squad.

Both the players are tipped tom move away from Barcelona in the summer with the Chilean midfielder reportedly close to signing for Inter Milan. However, Luis Suarez’s situation remains complicated as the Uruguayan and the Catalan side are yet to reach on a fee to free the striker of his remaining contract with the club.

(The above story first appeared on LatestLY on Sep 17, 2020 10:40 AM IST. For more news and updates on politics, world, sports, entertainment and lifestyle, log on to our website latestly.com).