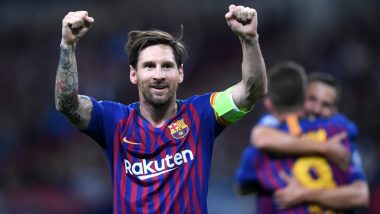 Lionel Messi recently became only the second-ever billionaire footballer. The Barcelona captain is the youngest player to ever achieve this feat after Juventus star Cristiano Ronaldo was the first footballer to do it last year. The 33-year-old is set to earn a total amount of $126m (£98m) in 2020, split between $92m (£71.6m) in salary and $34m (£26.4m) in endorsements. Cristiano Ronaldo Becomes First Billionaire Footballer, Beats Lionel Messi on 2020 Forbes Celebrity 100 List.

According to a list of the highest-paid footballers in the world by Forbes, Lionel Messi is set to earn more than any other football player this year, which will coincidentally make him the second-ever footballer to become a billionaire. The 33-year-old’s earnings include his salary with Barcelona and his endorsements deal. Lionel Messi Shares Video Showcasing His 20-Year Love Affair With Barcelona After Deciding To Stay With Catalan Giants.

Lionel Messi was among the news a few weeks back due to his future debate with Barcelona. The Argentine announced that he wanted to leave the club but after failing to reach an agreement over his transfer fee, the 33-year-old decided to stay in Catalonia and see out his contract which runs out in 2021.

The Barcelona skipper’s earnings consist of his salary and him being sponsored by the likes of Adidas and Pepsi. The six-time Ballon d’Or star recently partnered with Budweiser, where they released a limited edition beer for the 33-year-old. The Argentine also partnered with AI-vision company OrCam Technologies.

Cristiano Ronaldo is second on the list with reported earnings of $117m (£91m) in 2020. Brazilian trickster Neymar is in third place. The Paris Saint-Germain winger, who quit Nike to join Puma, is in line to pocket $96m, with his Parisian team-mate Kylian Mbappe fourth with $42m. Liverpool's Mo Salah complete the top five with earnings of $37m.

(The above story first appeared on LatestLY on Sep 15, 2020 08:49 AM IST. For more news and updates on politics, world, sports, entertainment and lifestyle, log on to our website latestly.com).