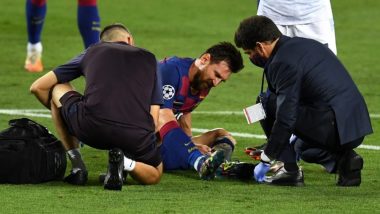 Lionel Messi is a major doubt for Barcelona for their UEFA Champions League 2019-20 quarter-final clash against Bayern Munich on Friday. The Argentine suffered a ‘fierce blow’ on his left leg in the 3-1 win over Napoli, which confirmed Barcelona’s progress into the quarters. But the club now face the danger of playing Bayern Munich without their talismanic captain. Barcelona coach Quique Setien had earlier assured the fans that the Argentine had avoided any big damage to his left ankle and is fit to face Bayern. Barcelona Coach Quique Setien Confirms Lionel Messi Took a ‘Fierce Knock’ on Left Leg During UCL 2019–20 Match Against Napoli.

But if a report from Sport is to be believed the 33-year-old visited the club’s medical facility on Monday and spent some time with the doctors over his sprained ankle. The Argentine took a heavy blow to his left ankle after Napoli defender Kalidou Koulibaly kicked him while trying to clear a ball in the first half of the match. Upset Lionel Messi Refused To Shake Hands With Referee Cuneyt Cakir After Barcelona vs Napoli Match Following VAR Controversy (Watch Video).

Messi was left writhing in pain after the knock to his left ankle and although he went to play full 90 minutes, Setien had told the media, post-match, that the ankle region was swollen due to the power of the kick on his leg.

Barcelona were given an off from training on Monday following their hard-fought 3-1 win over Napoli in the second leg of the UCL 2019-20 round of 16 stage. The players are set to depart from Portugal, where they play the remainder of the Champions League campaign, on Thursday and will be facing Bayern in the quarters. The Bundesliga champions thrashed Chelsea 7-1 over two legs to advance into the last eight round.

Messi picked up the knock in the first half with Barcelona leading 2-0 in the match and 3-1 in aggregate. The incident occurred when Koulibaly was trying to clear the ball from the Napoli box after a melee. But Messi slipped in front of him hurrying the centre-back who only found Messi’s leg when he tried to kick the ball away. Barcelona were eventually awarded a penalty for the foul from which Luis Suarez made it 3-0.

Barcelona are certainly sweating over the fitness of their captain and star forward. The players return to returning on Tuesday and it will be interesting to see if Messi sits out of the training sessions. Despite the injury, the 33-year-old is expected to play a role against Bayern. Whether he can start the match is the question for Setien and Barcelona.

(The above story first appeared on LatestLY on Aug 11, 2020 10:06 AM IST. For more news and updates on politics, world, sports, entertainment and lifestyle, log on to our website latestly.com).