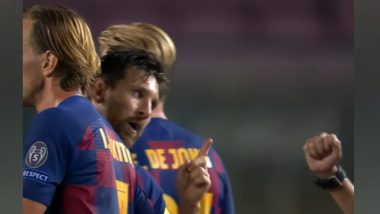 Barcelona defeated Napoli 3-1 in their second leg Round of 16 encounter to qualify for the UEFA Champions League 2019-20 Quarterfinal. Barcelona qualified for the next round on 4-2 aggregate. Lionel Messi was one of the scorers for Barcelona as he netted a goal in 23rd minute. Apart from him, Clement Lenglet and Luis Suarez netted a goal each in the first half as well. Messi, however, had another of his goal ruled out by VAR after it was found that the ball contacted Messi’s arm as he brought it down. Lionel Messi Injury Update: Barcelona Coach Quique Setien Confirms Argentine Star Took a ‘Fierce Knock’ on Left Leg During UCL 2019–20 Match Against Napoli.

Interestingly, after the match, Messi, who was clearly unhappy with Turkish referee Cuneyt Cakir, refused to shake hands or fist bump as post-match greeting ritual. The incident was caught on camera and Messi it appeared was saying something to the referee as well. Sunil Chhetri All Praise for Lionel Messi After Wonder Goal Against Napoli in UEFA Champions League 2019-20.

Messi refusing to shake the hand of that corrupt scum referee💉💉💉💉 pic.twitter.com/2avaax8uB7

One can see in the above footage that Messi was pointing ‘no’ towards the referee who was approaching the Argentine footballer for the post-match greeting. And it clearly shows that Messi had some issues the official. Meanwhile, Barcelona will now face Bayern Munich in the UCL quarterfinals on August 15 as per IST.

(The above story first appeared on LatestLY on Aug 10, 2020 03:04 PM IST. For more news and updates on politics, world, sports, entertainment and lifestyle, log on to our website latestly.com).